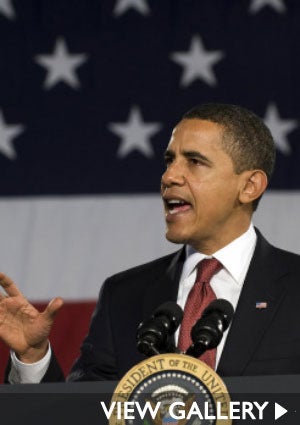 Barack ObamaÂ¹s intelligence and knowledge is vast. He’s understanding, he’s generous. These are all things that not just Black men, but any human being can benefit from. But when he was elected, I think a lot of people, not just Black folks, felt life with an African-American president was going to be presto chango! I’m not taking about the economy, but racism. Many felt we were entering a post-racial climate, which I think is the biggest crock ever. As a people, we have to understand Barack has to be President for the United States of America. It’s unprecedented what he’s doing. He’s on uncharted waters. He needs our support, he needs our prayers, he needs our help in moving forward.

Barack has a definite influence on young boys. I see it with my own eyes with my 12-year-old son Jackson. If we’re at a dinner and someone says something critical of Barack, he stands up at the table and defends him. Jackson’s not having it! He’ll say, What do you want him to do? He’s doing his job! Leave him alone. He’s proud of his president. We can’t even estimate now the influence Barack will have on young Black boys, or the influence of Sasha and Malia. They’re going to have a great effect on young Black girls too.

When I’m asked why, with Barack Obama in the White House, we still see such one-dimensional depictions of Black men in mainstream and even independent films, my answer is that Barack’s presidency doesn’t have anything to do with Hollywood. For the most part, Hollywood has been liberal. What we need in Hollywood is more variety. Let’s show the full aspect of the African-American experience. We’re not one monolithic group. We’re a whole lot of different things: we look differently, we talk differently, we think differently. I’d like to see that diversity shown in movie theaters and also on TV screens. But we’re not getting that. I can’t say it’s all because of White folks who run Hollywood. You can’t blame everything on them either.

The opinions expressed in this commentary are solely those of Spike Lee. Lee’s most recent film, Passing Strange, airs on PBS, and he is currently working on a sequel to Inside Man. For more information on Black Men in the Age of President Obama, log on to CNN.com.