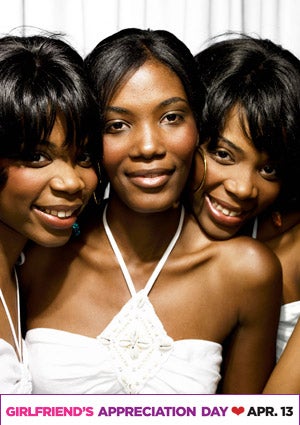 Three weeks ago, I stood in front of a group of women, most of whom I knew, at a sold-out celebration for my upcoming book. I’d prepared an outline of what I wanted to say, something deep that sounded author-like. I was fine as I was called to the podium, okay as I took the step forward to address the crowd, and as soon as I opened my mouth, my words left me.

That doesn’t happen often. Through practice, I’ve trained myself to blah, blah, blah, with the best of them, make nothing sound like something by way of alliteration and metaphor, until I can come up with a point so it sounds like I was going some place deep all along. But not that day.

Perhaps if I were standing in front of a room full of strangers, I would have been “on.” But there were too many familiar faces in the crowd, my girls, the ones that don’t have to read my book to know the contents because they lived — are living — the life alongside me, or at least on the other end of the phone. They are the ones that got me — get me — through when I’m overwhelmed, and keep me afloat when I’m sinking! There’s no BS-ing them.

So I stand there, looking at all these brown faces, searching for words and only two come. I wonder if I should just say them and sit on down since they sum everything up so succinctly.  But I don’t. I have to tell the whole story.

“When I moved here… ” I began, voice cracking already. A tissue appears from nowhere, courtesy of one my aces close by.

I moved to New York when I was 21. I didn’t know a single person. The first two weeks I was fine. I wandered around the streets taking in the culture and the (noisy) atmosphere, exploring the neighborhoods, eating in cute restaurants. I’m an only child. I’d lived overseas alone by then. No problem until Week 4.

It happened while I was leaning against the wall, impatiently waiting for my noodles to boil on the stove. I realized there were 250 miles of I-95 separating me and a friend who could brunch on Sunday afternoons, or meet up with me for happy hour and scan the room for boys, or would drop everything and “be there in 10” when I was in the middle of what I considered in my 20s, “a crisis.” It hit me harder than a Chris Brown-hurled chair at a network studio window and I shattered just the same. I had an ugly cry. Wailed from deep in my diaphragm as I slid down the wall and landed on my butt on my kitchen floor all while the water boiled till it evaporated and the pot burned. I missed my girls.

It wasn’t as simple as picking up the phone and hearing a voice. I needed Sabrina there. We’d met in the dorm bathroom the first time I ever got drunk. I was a sophomore praying to a porcelain god. She was a Freshman who’d shuffled into the bathroom in the middle of the night to do the obvious, found a stranger dying in her midst, and shuffled back out and back in to bring me water. She was a nurturer, a thin-thing who could always be counted on through the years to somehow give a mama hug that made it — whatever it was — all better.

I wanted Aliya, who I met at school in eighth grade and can’t remember how. She was (is) my sister, the me who lives outside me, something I realized one night when we were sitting in the window of a hole-in-the-wall restaurant in Adam’s Morgan eating falafels at 3AM. We were wearing ball gowns and sneakers and watching the foot traffic in companionable silence. (Long story.) Who does that? Me and Aliya, that’s who.  But who would do that here?

Of course, I called them both. Talked for hours, but the hole in my heart was just as big even with their assurances of  “you’ll be fine!” I kept with the motions of exploring New York, finding myself smiling at pairs of girlfriends walking down the sidewalk the way women do at couples so clearly in love. I sat at the bar in Cafe Habana once eavesdropping on a foursome of women behind me as they gabbed about careers, clothes, and cuties (in that order), and called the bartender back to order my food to go. The reminder of what I was missing made my heart ache.

I was walking through SoHo headed toward the train and feeling sorry for myself when a woman called out, “Excuse me!” I turned, wondering what I’d dropped or left behind. Her face looked familiar. “Did you go to Maryland?” she asked.  Martha was an English major. I’d had class with her at least three times in four years of undergrad, but we’d only spoken in passing. When I was thinking about studying abroad, a friend had given me her contact info since she’d lived in London the semester before and could tell me all about it. I’d never called.

We exchanged numbers, she invited me out the following day. She and some friends were getting together at some chic-chic foo-foo restaurant after work and did I want to come? Of course.

We became friends. Not besties — those spots were already reserved — but she held me down. The night after I was assaulted by a male friend, I slept on her couch. She took off work to go to the police station with me. When I finished grad school, we went to the club and she had the DJ shout a “Congratulations!” to me over the Biggie set. We vacationed in Miami twice in two months and I’ll take the details of those trips to the grave.

I looked out at the crowd of women before me. A myriad of ladies I’d brunched with, partied with, prayed with, cried with, leaned on, lifted up, supported, nurtured, listened to, been advised by, and been cursed out by too in the ten years since I made my first friend in a my new hometown. I remembered when there was no one, ten years later there was a room full. They’d taken me, are taking me, a long, long way from where I started.

I ended my speech in the only way remotely appropriate, with the two words that had popped in my head when I started: “Thank you!” Two words tell more stories and express more gratitude for my girls than any others ever can.

Demetria Lucas is the Relationships Editor at ESSENCE and the author of A Belle in Brooklyn: Your Go-to Girl for Advice on Living Your Best Single Life (Atria). Follow her on Twitter @abelleinbk