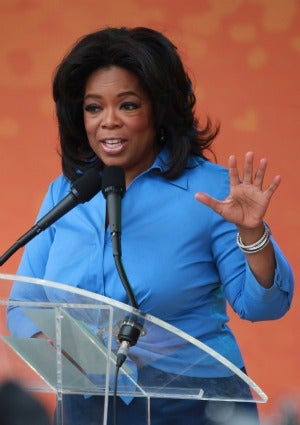 Like literally one million other Americans, I spent a chunk of my New Year’s day tuning in to the launch of Oprah Winfrey’s new cable television network, OWN. For hours, my bestie and Iaid in my living room glued to the flat screen. Somewhere after “Master Class” featuring Jay-Z (picture HBO’s The Black List with an hour dedicated to each of your favorite subjects) and before the end of “All Access Pass: Season 25: Oprah Behind the Scenes,” I had a revelation: “Not too many Black folks in the Oprah empire, huh?”

It wasn’t a criticism, just a random observation. After about six hours of constant OWN programming, which included several producers and behind-the-scenes types at the Harpo empire, I’d counted enough Black folk for one hand. “Add in Christina Norman,” my bestie chimed in. “She’s the CEO and Black. She’s behind-the-scenes, too.” That made six. Two hands.

Since I’d had my own aha moment, I wasn’t all that surprised to find an article, “Oprah’s OWN Network: Is a Positive Platform Too Much to Ask?” headlining on Clutch.

Bene Viera wrote: “While I applaud Oprah for her accomplishments and purpose behind creating OWN, I cannot turn a blind eye to the lack of representation of Black women… there is nothing tailored to fit the unique lives of Black women.

“Not only would programs structured for Black women be beneficial and relatable to all ethnicities, but it would have given Oprah’s largely White middle class demographic an opportunity to empathize with our plight, to recognize we want the same things as women worldwide, to understand Black women are making major moves professionally, and there are countless Black women shattering glass ceilings.”

Um… Black people, we got to stop with this. Flip over your Black Cards. In the small print below your signature, nowhere does it say, “we, the Black people are obligated to put on, look out for, or hook up other Black people just because they’re Black.” It’s great when we do, of course, but to expect that because a person is Black that they must always represent for Black people is a baffling sense of entitlement and frankly, an abuse of Blackness. We’ve raised the same argument for First Lady Michelle Obama not wearing Black designers during Inauguration Week, for the POTUS “not doing enough” for “Black issues” (he’s a Black president, not the president of Black America), and for any Black person who publicly criticizes the “art” of Tyler Perry.

The woman whose Black allegiance is being questioned is Oprah friggin’ Winfrey. She might not have put Black women en masse on OWN, but she produced the film version of Toni Morrison’s “Beloved” and got “The Color Purple” on Broadway. The woman bankrolled a school for Black girls in South Africa and hosted a Legends Weekend to honor the best and brightest among Black female entertainers and thinkers. She’s been on TV every weekday for twenty-five years and has yet to embarrass The Race. Is that not enough good will for a lifetime payment in Black dues?

I’m further confused as to how a network dedicated to one Black woman’s philosophy of living and a channel where the same billionaire Black woman is prominently featured in multiple shows isn’t representing Black women. There may not be a whole lot of Black people on the network, but there is a whole lot of Oprah and she’s still Black, right? Or did I miss where we traded her for Teena Marie (RIP) in Dave Chapelle’s racial draft?

OWN is a network centered around living your best life and becoming your most authentic self. What exactly makes that not Black enough? Do the people in the midst of life-changing journeys need to be Black in order to relate to Black women? If so, why?

Lastly, why are we trying to prove “hey! we’re just like you!” to White people? Newsflash: If the White people who are devotees of the twenty-five year Oprah brand haven’t learned to empathize with Black women or acknowledge our super powers as demonstrated by Oprah, a show or a whole line-up about Black women leaping smaller buildings in single bounds isn’t going to sway them into a multicultural, kumbaya trance.

There are some things that transcend race. And the core themes addressed on the hours of OWN I soaked in this weekend — self-determination, family, a sense of purpose/belonging, forgiveness, inner peace, etc.— aren’t Black issues, or for that matter White, blue or green concerns. They’re human yearnings. Would it be nice to see some more melanin? Of course. But two Black power-women calling shots and running a network? That’s still pretty unique and the idea of Black women as boss chicks represents me just fine.


Demetria L. Lucas is ESSENCE’s Relationships Editor and the author of A Belle in Brooklyn: Advice for Living Your Single Life & Enjoying Mr. Right Now (Atria), which will be released in June. Pre-order her book now on Amazon.com.