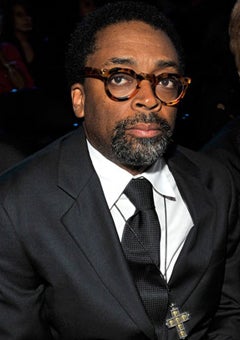 This happened, according to Box Office Magazine, at a press conference, in front of mainstream reporters at the premiere of Perry’s new movie, “Madea’s Big Happy Family.” Since 2005, we have seen Perry, dressed in drag on the big screen as a big-boobed, gun toting, foul-mouthed, weed-smoking granny.

And, for the past two years, we have witnessed Lee publicly attacking Perry’s movies as stereotypical; comparing them to Amos and Andy and shucking and jiving. Frankly, I wish both of them would shut the heck up.

I have surely had a giggle or three watching Tyler’s antics in drag, but I can also appreciate Spike’s taking on the establishment in “Do the Right Thing” and “Malcolm X.” Spike makes social commentary films and Tyler makes people laugh. We are not a one-dimensional people, so why should our films be?

It seems no matter what Black filmmakers in Hollywood put out, they can’t catch a break from the Black community. We are our own worst critics and our own worst enemies. Lee Daniels caught flack for bringing “Precious” to the big-screen. We accused Daniels of glorifying incest and familial abuse, but nevermind the fact that the movie’s message touted triumph over adversity.

Tim Story caught hell for “Barbershop” which was a comedy about, really, nothing more than the trash-talking that goes on in any given Black barbershop. Yet we slammed Story for having “stereotypical” characters, from an ex-con, to the loan shark to a trash-talking old-head barber in the film. Whatever happened to being able to appreciate movies simply for what they are: entertainment?

Some, including Lee, would argue that by patronizing Perry’s movies, we are sending a message to Hollywood that those are the only type of films that the Black audiences will pay to see. This may be true, but is it incumbent on Perry to be “Captain Save the Race?” Ironically, in a sense, that is exactly what Perry has managed to do, at least where Black Hollywood is concerned. He owns a production studio that employs more Black actors and executives than arguably all the major film studios combined. Perry’s movies have grossed over a half-BILLION dollars, more than any other Black filmmaker in history, and Tyler has gotten Black people to the cinema in droves; something that no other filmmaker, Black or White, has been able to consistently accomplish.

I am not saying that I agree with all of Perry’s movies or his characters. As a Black woman, I find many of his loudmouth, conniving female characters offensive, but nothing exists in a vacuum, including his movies’ themes or characters. To his credit, his films underscore important issues that are relevant in our community such as drug abuse, domestic abuse, marriage and infidelity. To consistently malign Perry as the filmmaker who is single-handedly bringing down the Black race is patently unfair.

Lee is certainly entitled to his point of view, but as a socially conscious Black filmmaker he should take a long hard look at himself when publicly criticizing Perry — everything is not for public consumption. Lee is doing just as much disservice to the Black community by maligning Perry’s movie to the mainstream press as he claims Perry is doing by making them. Adam Sandler may never produce critically acclaimed movies, yet Spielberg doesn’t publicly bash him for making insanely funny movies that portray inane characters that often reinforce stereotypes. Every other race seems to have a tolerance and respect for their own — that we as Black folks just can’t get a firm grip on.

Is it too much to ask that two highly accomplished filmmakers have a dialogue about their differences? In a word yes, because nobody crowned Lee as the gatekeeper of Black filmmaking. Perry is entitled to make whatever films he pleases. However, if Lee insists on getting his point across, the better way to do it is not through the media, but by having a mature conversation one-on-one with Perry. I am just asking Spike to do the right thing…