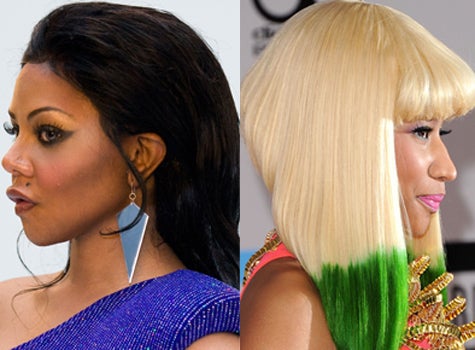 Love her or hate her, Nicki Minaj is certainly going into the books as one of the breakout stars of 2010. While female emcees have long had a hard time establishing themselves in both independent and mainstream markets, the Queens native is (sadly) one of the few who seems to be making any above-ground noise right now. Nicki’s image has been the topic of a lot of debate, but no one seems to be less of a Minaj fan than one Kimberly Jones, known by the world as Lil’ Kim. As the former’s career seems to be in so many ways inspired by the latter, was their beef inevitable? Or is the Nicki vs. Kim situation simply another case of Black women who can’t get along? From a purely superficial standpoint, Nicki’s career certainly looks like an improvement on the design set forward by Kim; the brazen, baudy sexuality remains, but is not accompanied by greater self-possession and autonomy. She acknowledged her predecessor as an inspiration in a number of interviews, but the Queen Bee still felt she was owed a larger debt of gratitude and deference. After a period of remaining quiet, Minaj finally struck back at her rapping elder on “Roman’s Revenge”: “F*ck I look like responding to a has-been?” The inability to get along with peers is not a Black female problem — women of all races have experience with back-biting, gossip and dissent. Ultimately, it’s not the responsibility of two rappers to take on the challenge of teaching Black women how to get along better. When Jay-Z and Nas beefed, no one mentioned their gender. It was not only chalked up as “just a part of the culture,” but it was also an exciting moment for hip-hop fans. The fact that Kim feels she has to go after the only woman in the game who’s selling records, however, speaks volumes about how far we still have to go in terms of keeping a consistent female presence on the microphone. While competitiveness and battling is so much a part of the landscape of hip-hop, the fact that Nicki is the only female rapper who’s getting songs on the radio these days might suggest that the game should be adjusted accordingly. Imagine if Kim had chosen to support her young sister in rap, instead of baiting a beef? It could have not only reintroduced to her to Minaj’s largely teeny-bopper audience that knows her more as a “Dancing with the Stars” contestant than a rapper, but it might have created a new precedent for female rappers. Instead, she’s attempted to fight with the younger, more current performer and has compromised her own legacy in the process. Black women are no more challenged than anyone else when it comes to getting along, but because we face unique issues as a group, a unique level of solidarity might be appropriate. You may not be on stage with a fake nose and an unhealthy obsession with a late lover, but you might find that a younger woman at your job, school or social organization has started to outpace you. Instead of bashing her, try to find a way to support her growth and use your combined powers for good. If you are the young ingnue, pay your respects and show deference when it’s due. Rap music is a lot better at showing us how not to act than it was during the days of old; dare I say Kim and Nicki might be teaching you a lesson right now? In 2011, let’s work to support our relationships with our sisters.