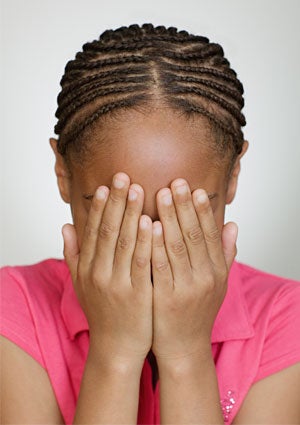 Surely you’ve heard about the 11-year-old girl who was gang raped in Cleveland, TX by 18+ Black men. For clarity (and in case you haven’t actually heard), that’s not two or so men who were over 18 years old. Rather it’s eighteen or more men between the ages of 14 and 27 who raped an 11-year-old girl. And I don’t put “alleged” in front of rape, because the boys and men are seen are on digital having sex with an 11-year-old. And I don’t care if she gave an “enthusiastic yes!” stripped naked and p-popped like a Luke dancer or begged like a porn star for the boys and men to pleasure her, she’s 11 and 11-year-olds — sixth graders — can’t consent to anything, at all, including sex. There’s no far-fetched “but she wanted it” that should even be rolled around as an idea, much less roll off the tongue, when we’re talking about an 11-year-old.

From Denene over on My Brown Baby:

Most other human beings would have sympathy for an 11-year-old, sixth-grade girl who was repeatedly raped for hours by random men in a squalid Katrina trailer while others stood around laughing, videotaping and waiting their turn. But they must make ’em extra special in Cleveland, TX, because folk — an outspoken Black community leader and mostly the mothers and sisters and grandmothers and family members of the accused — have taken to the camera and the newspapers to… wait on it… dog out the little girl. She wears make-up. And dresses provocatively for a tween. And talks about sex on her Facebook page.

Fox 26 ran an interview with Anita Ellis Hancock, the mother of a 19-year-old suspect.

FOX 26: If this was reversed. If your son wasn’t your son, but you were the mother of this 11-year-old, what would you do? What would you say? What is justice?
Hancock: First of all, I would know where she was. That’s the justice. Not knowing where your baby is is not justice. I feel like she should be accounted for not knowing where your baby at.

Now, there might be some iota of a chance that she actually looks way older than 11. A small iota. So let’s not even play the “they might not have been able to tell” defense. She might have looked 15, tops. She didn’t look old enough to consent. Also, let me point out that arguing over how old the girl is versus how she looked was the same thing people did to defend R. Kelly. That girl was 14 and actually looked YOUNGER than her age, maybe 11 or 12 with buds instead of breasts. And yes, I saw the tape.

And a word about “Where was her mother?” Even if her mother had been standing in front of the trailer waving men inside and offering up her daughter for a tryst, it’s inexcusable for one boy or man, much less eighteen or more boys and men to have sex with an 11-year-old.  Inexcusable. And whether the mother is at the door or on the moon, her whereabouts in no way whatsoever lessens the crime that the boys and men committed.

Over on Color Lines, Akiba Solomon breaks down what acceptance of cultural mores that justify a kid being raped really mean:

In this framework, girls of color are the predators, the fast-asses, the hot-asses, the hooker-hos, the groupie bitches, the trick-ass bitches, the bust-it-babies and the lil’ freaks who are willing to let dudes “run a train” on them.

This double standard also renders Black men and boys as victims of their own sexuality. They’re big d—- goon and goblin niggas just doing what niggas do when a smiling, or at least not-protesting young girl comes around. She’s 11? OK, but I didn’t know she was 11, so I didn’t do anything wrong, or violent, or exploitative or dangerous. My responsibility begins and ends with a request for ID.

Millner expressed my core outlook better than I ever could, so here’s what I don’t have to say since she said it first and eloquently:

I’m so sick and tired of watching “leaders” and our people — especially women — throw our girls under the bus as they rush to protect the boys who’ve done wrong. Are boys and men of color under attack in our communities?

Absolutely. I know firsthand; I’m a wife, mother, daughter, sister, cousin, friend and mentor to a host of beautiful Black men who’ve spent a lifetime staring down injustice. But dammit, not every Black boy or man deserves our allegiance — our unyielding support. Sometimes, they do wrong. Real wrong. And like any other criminal — especially those who rape women and, by God, 11-year-old girls — they should be prosecuted and, if found guilty, forced to pay dearly for their crimes. Sans cheerleaders who think vilifying and demonizing female victims is tantamount to “fighting for the cause.”

This time, can we let “the cause” be about supporting and rooting for the little girl?