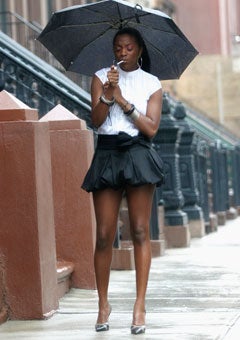 As Black women, it’s often a struggle to find places where images of ourselves are reflected at us in the media. Advertisements in magazines or on television seldom illustrate our beauty or intrigue. At least this was the case until menthol cigarette companies, or dare I say “pushers,” saw us as a wide-open market.

They labeled African-Americans a “deprived population” that was desperately seeking immediate gratification that they were all too happy to fill. Thanks to the predatory cigarette industry, we began to see ourselves everywhere. Images reflected of young, sexy Black men and women playing cards, drinking liquor, or singing jazz — all with smoke seeping out of our their mouths and hovering over their heads. The captions read “be authentic,” “be bold.”

Their ads enticed us. They beckoned us, telling us that in their ads we were visible, if nowhere else. And now an estimated 19.2 percent of African-American women smoke. But even more disturbing is that men generally have higher rates of smoking than women, except when it comes to menthol cigarettes. An estimated 85 percent of African-American women smokers puff on menthols — the highest rate among all smokers in the United States.

For our community menthol is not just a problem. It’s an epidemic.

Smoking is an epidemic that far too many of us have fallen prey too, including me. As the younger sibling, I longed to be “cool,” and smoking was the easiest way into that “club.” The harshness of the smoke had me hacking my brains out. But no matter how painful it was, I couldn’t get the images of beautiful Black women with long “elegant” cigarettes hanging between their polished nails out of my mind. They had me thinking to myself, “I want to be sophisticated like them.” So the next time I tried to smoke, I bought the cool, refreshing, minty ones instead of the “nasty” cigarettes.

My experience was not unique, as statistics indicate. But I’ve often wondered if I would have developed a smoking habit that lasted well into my twenties if the “sweet minty” cigarettes weren’t on the market. The latest report from the Center for American Progress entitled, “Flavored Death and Disease for Minorities,” may finally have a solution to my query. It recommends that the Food and Drug Administration ban all menthol-flavored cigarettes just as they banned candy and spice-flavored cigarettes a few years ago.

The good news is that the majority of menthol smokers report to the National Cancer Institute that if the FDA bans menthol-flavored cigarettes, they will quit smoking altogether. So eliminating them would save countless lives and spare us many of the costly and often preventable diseases that plague our community such as lung cancer, heart disease, and asthma.

It’s time to let the tobacco industry know that we are indeed bold and have “come a long way, baby,” and recognize that the health and wellness of our community is no longer up for sale.

Let them stick that in their pipes and smoke it.

Danielle Moodie-Mills is an Advisor for LGBT Policy & Racial Justice at the Center for American Progress. Her work with the Fighting Injustice to Reach Equality, or FIRE, initiative explores the intersections between race, economics, and sexual orientation.
Follow her on Twitter @FIREFund