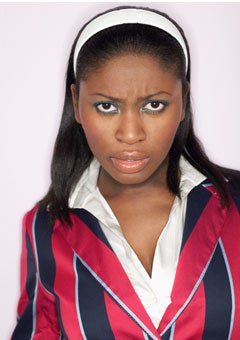 Recently, I was walking through a mall with one of my good girlfriends and I couldn’t help but notice the number of women checking us out. Not in a flirtatious way; they were appraising us. You know what I’m talking about, ladies: studying another woman’s hair, face, clothes and shoes with judgment written all over your face. This is something I’ve caught sisters doing for years — and something I’ve made a point not to do myself — and it drives me up the wall.

I don’t like being stared at by people of any gender. But it’s one thing for a woman to check you out and then offer a sisterly smile or compliment, and another one for her to end her review with an eye roll or whisper to her companion. With the latter, it may be that she thinks you’re fly and she’s… I hate this word, but it’s appropriate sometimes… hating. Or maybe she really does think your outfit sucks and your hair needs work. Worse, even: she may be dubbing you with the “she thinks she’s cute” stamp.

Side note: I would like to end all usage of the term “she thinks she’s cute.” Why? Because she (and you, and me) SHOULD think that she is cute! And so should you and so should I! We have enough forces out here assaulting our self-esteem and trying to make us feel low… so when you see a woman who seems confident about who she is, you should admire that attitude instead of wanting to tear it down.

Famed actress Angie Dickinson once quipped, “I dress for women; I undress for men.” I’ve always thought that was a clever quote. However, I dress for Jamilah and I always have. Truth be told, if I’ve ever taken either gender’s thoughts into consideration about my clothes, it would again be men (and not in a “Men like ____, so I should wear them” kind of way, but simply choosing pieces that cut an attractive silhouette and flaunt my assets). I’ve never gone to the club wanting to be in the Shoe Olympics with a bunch of other women, never thought about picking out a dress that would “kill” the other girls.

Some women do think of shopping and dressing as a competitive sport; more power to them. I’m only interested in competing with myself. Do I feel pretty, sexy or fly? Then my mission has been accomplished. And if I’m just going to Target, while I won’t look like a total bum (you’ll only catch me doing that en route to the corner store), I don’t want to feel like other women are out here judging me in some sort of pageant I didn’t sign up for.

As I mentioned earlier, I do understand that a lot of the ill treatment comes from other sisters who do think you look good. That sucks. So long as you live, you will share the Earth with other beautiful women. Some of them will make you feel like you pale in comparison (which they shouldn’t, but you’re human and we all fall short of the self-loving glory). The last thing any woman should want to do is make someone else feel bad because of her own insecurities. There is enough shine to go around!

If you see something you admire or like about another woman — perhaps a funky hairstyle or a stunning dress — consider telling her so instead of staring. She may be feeling down herself and that compliment might make her day! And if you notice a sister wearing something that doesn’t tickle your fancy, at least have the good manners to keep your judgment off of your face! She didn’t ask for your approval and you may be surprised to learn that your style may not get her vote of confidence either. There’s enough poison out here to make women feel just awful about themselves… no need to add more to the pot.