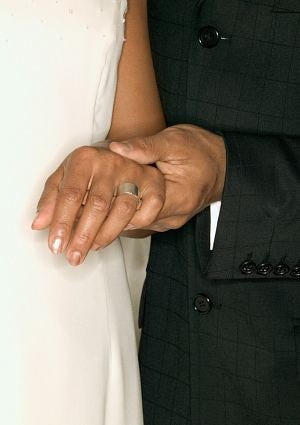 By now we’re somewhat familiar with polls and surveys telling us that single Black females are in a bad situation: can’t find a good man, and definitely can’t keep him. But it still took me by surprise to find that while the oil spill gushes in the Gulf and unemployment rates are disappointingly high (according to data released today), the New York Times thought it appropriate to put on it’s front page a story on a Pew study showing that more Black men are marrying women of other races than are Black women. The article, “Black Women See Fewer Black Men at the Altar” is based on recent Census figures and studies from the Pew Research Center and began with this pearl of an intro: “It is a familiar lament of single African-American women: where are the ‘good’ Black men to marry?” Reading that you may think, “Maybe the New York Times cares,” because let’s face it, we may have had this conversation with girlfriends (the operative word being may), often behind closed doors, rarely in the pages of a national newspaper. The study found that 22 percent of Black men married a non-Black woman in 2008, compared to eight percent of Black women. This is a significant jump for Black men, up from 15.7 percent in 2000. Overall, the study found, interracial marriages account for one in six marriages in the US, and Black-White pairing are still the least common (1 in 60). Back when President Obama’s parents married it was 1 in 1000. But on the subject of single Black women in particular the article notes:

Sociologists said the rate of Black men marrying women of other races further reduces the already-shrunken pool of potential partners for Black women seeking a Black husband. “When you add in the prison population,” said Prof. Steven Ruggles, director of the Minnesota Population Center “it pretty well explains the extraordinarily low marriage rates of Black women.”

We’ve been here before, too many times to recall, but perhaps most notable (and problematic) was on Nightline’s “Face-Off” which pitted Black men against Black women to answer that most important of questions: “Why Can’t A Successful Black Woman Find A Man?” Is it me or is the onslaught on the integrity of Black women at an all-time high? Like it or not the plight of single Black women has now been superimposed onto a national stage and the undertone of all this coverage is dripping with racism and sexism. In essence, I smell a rat. Don’t you? And maybe, as pointed out by Princeton professor Melissa Harris-Lacewell, it’s not all coincidence. She writes:

Which social issue appears on the public agenda is never accidental. In this moment of economic crisis, social change and racial transformation it is meaningful that Black women are being encouraged to exclusively embrace traditional models of family and to view themselves as deficient if their lives do not fit neatly into these prescribed roles.

What do you think?