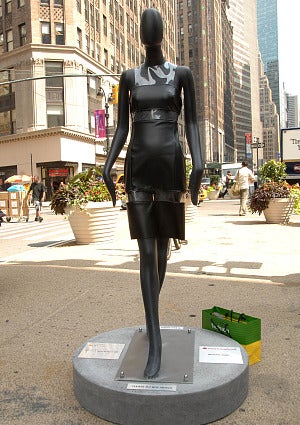 Dressed in designer threads, a series of 30 fashion mannequins hit the pavement in NYC from Times Square to Herald Square as part of an initiative to revive the city’s lackluster Garment District. The initiative, which began June 24 and is set to last through September 3, has been dubbed “Sidewalk Catwalk.” Positioned on Broadway between 34th Street and 42nd Street, the mannequins wear designs courtesy of Donna Karan, Tommy Hilfiger, Michael Kors and Diane von Furstenberg, to name a few. Designers were encouraged to use metals, foams, glass and other sturdy materials that won’t fall to pieces during the sticky Manhattan summer. After leaving their respective runways the mannequins are rumored to be headed for auction.