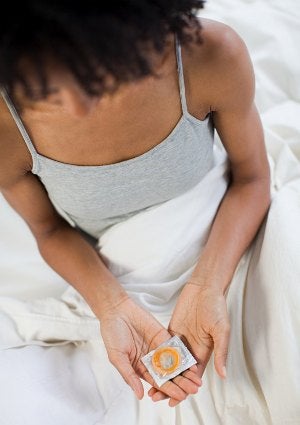 When a recent study revealed that a surprising 18 percent of Americans say they never use condoms during sexual intercourse, Betty Confidential wanted to know why. Seriously why? With all the information on STDs and all the different varieties of condoms out there for his and her pleasure, why are people not using protection? BC got some answers and posted them on Yahoo Shine. Here’s what they found. “Can’t Fight the Feeling” Most men and women who don’t use condoms said that sex with the latex contraceptives just doesn’t “feel as good as no-condom sex.” But here’s what else they found — “most respondents acknowledged that with the right size condom and the right amount of lubrication (natural or store-bought), the decrease of sensation was negligible. And many of the guys quietly murmured that the slightly dulled sensations of condom-sex helped them sustain the festivities for a longer time.” “Right Here, Right Now” A lot of folks said they didn’t want to ruin the moment by stopping to strap on some protection. One woman even said, “I feel like a real grown-up when I don’t have to even think about condoms.” Really? Because that sounds like the least grown up thing you could do during sex.  “She’s Not That Kind of Girl” Many of the people that Betty Confidential spoke to said they’d rather just assume that their super “smart and educated” partners are probably STD free. “Everyone assumes this — and yet doctors suspect roughly one in four Americans have herpes,” The article reads. “Call me crazy, but I don’t think 25 percent of Americans walk around looking like STD machines to be avoided at all costs.” “Make Love, Not War” This is one of the most troubling reasons for us. A lot of women are opting to not use condoms so they can “avoid a fight” with their partners. “Sometimes it’s like a little gift you can give him,” one woman explained, “to make him feel special.” Wait until your next partner gives you the non-returnable gift of herpes.