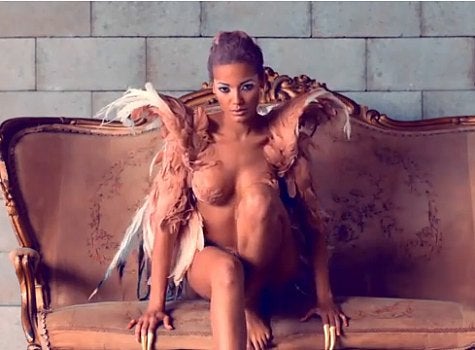 Everybody’s talking about Victoria’s Secret model Selita Ebanks since her acting debut as an ill-fated — but oh-so-glam — phoenix in Kanye West’s “Runaway” short film. While most of the world was pleasantly surprised she had it in her, the 27-year-old supermodel says she’s been taking acting classes for 10 years. She chatted with ESSENCE.com about getting “phoenix-ed out,” working with Kanye West and who she’s really dating: ‘Ye or Maxwell? ESSENCE.com: Where were you when “Runaway” premiered in the U.S. this past weekend? EBANKS: The first time I saw it was at the Paris premiere, and even watching it then it was unbelievable and I didn’t get a chance to fully absorb it because I’m my biggest critic. When I finally saw it on Saturday I was actually at home sick with a cold in the bed by myself and I got to really take it all in. I was like, “Oh man, this is so cool!” I was tripping. ESSENCE.com: Were people calling and texting you like crazy? EBANKS: I may have to get another phone number because my phone has been non-stop. It’s all good though ’cause I’m just trying to take it all in stride and remain humble. ESSENCE.com: Did you have any idea this was going to be such a huge moment? EBANKS: When ‘Ye told me about it he said, ‘Selita, this is gonna be huge for you.’ He’ll even tell you he didn’t think I was gonna go in on the character as hard as I did. My thing is commit and proceed, so once I agreed to it, I was down. There were some budget issues while we were in filming and I told Kanye, ‘Look, I flew all the way out [to Prague] and I’m ready to be the best phoenix I could be.’ It worked out pretty well, and I’m pretty proud of myself. ESSENCE.com: How did you get in character? EBANKS: I did a lot of research about the phoenix and the mythology around it. I sat down with Kanye to pick his brain as much as possible because it was really important for me to complete his vision. He let me be creative and he let me do my thing. And there were many times when I was in character and he was sitting there laughing at me, and I had to stay phoenix-ed out. I was hard at times but I stayed in character. ESSENCE.com: You know everyone thought you were dating before this video premiered? EBANKS: That is so funny. In the beginning I didn’t want to tell people, ‘Well we’re just hanging out because we’re doing this movie together. So I just let them talk and it didn’t really bother me. I mean, he’s not a bad guy to be associated with, but no we’re not dating. ESSENCE.com: What about that other rumored relationship? Are you and Maxwell an item? EBANKS: [laughs] No, we’ve never been an item. He’s just a good friend. This is the part that kills me. Every time I take a picture with any man all of a sudden I’m dating him. I’m like, ‘No.’ Of course he’s Maxwell, and he’s gorgeous, but he’s not mine. I’ve been single for so long, and I’m just trying to concentrate on my career. If the Lord sends me an amazing man, then I’ll be here. ESSENCE.com: Back to your acting debut. Has this inspired you to pursue other acting projects? EBANKS: Well, I’ve been studying acting for about 10 years now and it’s always been therapy for me in a way. It’s something I’ve always wanted to do, but because I’m a model, I’m automatically looked at like, ‘She’s a model, let’s just give her a role where she plays a model, has two lines and takes off her clothes.’ Granted I was nude in this film but I was a real character. Kanye knew I was studying acting but didn’t know I was so serious about it so I think I surprised him a little bit. If there’s any roles in the future, I’m taking them. I’m ready.