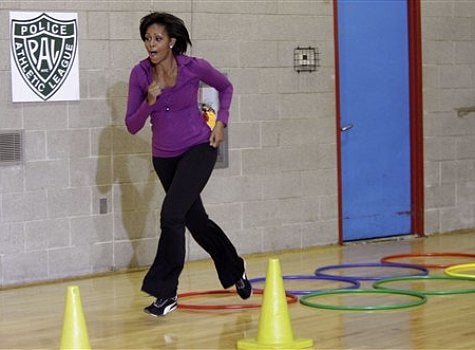 Former 2008 Vice Presidential hopeful Sarah Palin is back on the scene, and making quite a few waves by criticizing First Lady Michelle Obama. On the Dr. Laura Ingram radio show on Wednesday, Palin attacked Mrs. Obama’s stance on reducing childhood obesity, calling the campaign another example of a philosophical devotion to big government. This was the second attack Palin made on Mrs. Obama this week — the first being timed simultaneously with the release of her book, “Sarah Palin’s Alaska.” On Dr. Laura’s show, Palin said of Michelle Obama, “Take her anti-obesity thing that she is on. She is on this kick, right. What she is telling us is she cannot trust parents to make decisions for their own children, for their own families in what we should eat. And I know I’m going to be again criticized for bringing this up, but instead of a government thinking that they need to take over and make decisions for us according to some politician or politician’s wife priorities, just leave us alone, get off our back, and allow us as individuals to exercise our own God-given rights to make our own decisions and then our country gets back on the right track.” Palin also said, “I think she has got a different worldview and she is not hesitant at all to share what her worldview is. And I will take heat again for saying it on your show Laura but she encapsulated what her view of America is, I believe, unless she has evolved and things have changed in the last two years, but she said it on the campaign trail twice that it was the first time that she had been proud of her country when finally people were paying attention to Barack Obama. I think that’s appalling. We can think of this infinite number of reasons to be proud of American exceptionalism and it baffles me that anybody would have that view and then allow that view to bleed over into policy.” The former Alaska Governor seems to think taking jabs at the First Lady, whose approval ratings are still pretty high, is going to enhance her chances of defaming the Obamas and taking the presidency in 2012. But with her own approval ratings dissipating, especially among female voters, perhaps going after FLOTUS isn’t the best tactic.