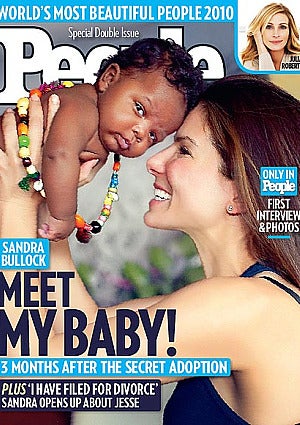 Sandra Bullock has had one heck of a year thus far. First, the Oscar for “The Blind Side,” then her husband Jesse James’ scandalous affairs, and now the revelation that she adopted a Black boy from New Orleans in January. She named him Louis Bardo Bullock. Cute name, and a great move for Sandy. Bullock joins a small group of Hollywood celebs who have adopted Black children, like Steven Spielberg (son, Theo), Tom Cruise (son, Connor), Brangelina (daughter Zahara) and Madonna (son and daughter, Mercy and David).  Though they’ve been ridiculed (remember the debate about Zahara’s hair?) and their motives questioned (do Black children really belong in a White household?) these celebs are really going against the grain of adoption trends. It’s a well-known (and disheartening) fact in the adoption community that Black children are less likely to be adopted than White or Hispanic children. In fact, Black children in the US account for 15% of the population and yet are 32% of the foster care system. And, according to a recent study conducted by economists at New York University and California Institute of Technology, a Black child is seven times less likely  to “attract the interest and attention of potential adoptive parents.” The study also found that parents were willing to pay upwards of $38,000 more in adoption fees for non-Black babies than they were for Black babies. More interestingly is the idea that perhaps Sandra was inspired to adopt a Black child after playing Leigh Anne Tuohy, a White woman whose family adopted Black NFL player Michael Oher. Whatever her reasons, it’s a thrilling example of life imitating art. And besides, a loving home is a loving home. Related stories: