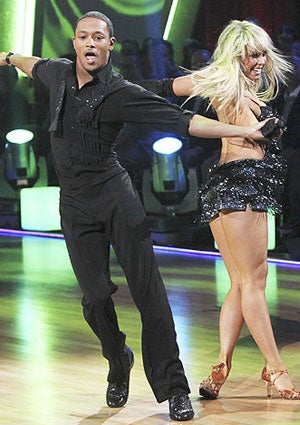 Twenty-one-year-old Percy Romeo Miller may be the youngest contestant on “Dancing with the Stars” this season, but he’s light years away from his lil’ rapper days. The son of Master P was just 12 when his single “My Baby” hit the top of the charts. He has since released three studio albums, played basketball for USC, launched a clothing line, filmed a big Hollywood movie (“Jumping the Broom,” due out May 6), and is now proving his mettle on the dance floor.

We caught up with him on his way to a “DWTS” rehearsal, where he has been practicing “that crazy Paso Doble” with professional dance partner Chelsie Hightower.

ESSENCE.com: Are you surprised by your own dance skills?
ROMEO: I am actually really surprised! Don’t get me wrong — I knew I had rhythm, but I never thought in a million years I’d learn the Cha-Cha, the Quickstep, the Rhumba, and now the Paso Doble. Doing “Dancing with the Stars” opened my eyes up to a whole other world. People think because I’m young and from the hip-hop world that I’m a dancer, but I’m not at all. If you believe, you can achieve. If Romeo can do “Dancing with the Stars,” anything is possible.

ESSENCE.com: Chelsie said early on that she thought you were afraid of looking effeminate or goofy. Was that an accurate read?
ROMEO: Yeah, but that’s why I decided to do “Dancing with the Stars.” First off, a lot people don’t realize I’m dancing with a cause — for my charity, Urban Born (urbanborn.org). I’m doing this for kids who are afraid to fail or afraid to be different. I want to show kids it’s okay to go out there and try. One of my favorite quotes by Wayne Gretzky is: “If you try, it’s 50/50. If you don’t try, it’s zero percent.” So that’s what I’m doing: When I get on that ballroom dance floor, I’m not the best dancer but I get out there and I act like I am.

ESSENCE.com: Judge Carrie Ann Inaba said the first week that “you have sex appeal for days.” Is that something you’re consciously trying to play up now to seduce the lady vote?
ROMEO: That’s funny because I don’t think I’m, like, sexy at all, though I’ll be sexy for Carrie Ann any day! [Laughs] It’s definitely one of those things people don’t realize. When I was playing college basketball, I had to work out every day; it benefited me physically. And you know, if some people may think I’m sexy, I’m not complaining about that. On the show this week though, you gonna see a whole other side. I wasn’t even trying to be sexy [when Carrie Ann said that]; this week, I’m trying. It’s gonna be crazy, I can’t wait — I got a lot of surprises for the ladies in the Paso Doble.

ESSENCE.com: So your dad famously refused to wear ballroom dance shoes in season 2, and you hated the “leprechaun high heels” you wore for the Rhumba. Does everyone in the Miller family have some kind of shoe hang-up?
ROMEO: The apple don’t fall too far from the tree. [Laughs] The Millers, you know, we’re more into sneakers: P. Miller shoes, Jordans… We’re basketball players. Not too many basketball players wear high heels.

ESSENCE.com: You’ve said before that you thought Wendy Williams was your biggest competition. Now that she’s been eliminated, who do you have your eye on?
ROMEO: I feel like my biggest competition is myself. A lot of kids get caught up in the comparing game — comparing themselves with Michael Jackson, comparing themselves with Michael Jordan. You gotta be your best. You gotta overcome your own fears.

Catch Romeo on “Dancing with the Stars” every Monday at 8/7c and Tuesday 9/8c on ABC.