Robin Roberts began her leave from Good Morning America a day early so she could fly home to Mississippi to be with her mother, Lucimarian Tolliver Roberts, who passed away Thursday at the age of 88.

Roberts’ co-anchor George Stephanopoulos announced the sad news on GMA this morning. “Robin did make it to say goodbye,” he said.

In a note passed around to ABC staff, Roberts is said to have traveled to the storm-damaged town of Gulfport, Mississippi, making her way through “flooded and blocked roads to be with her beloved Mother in time to see her.” 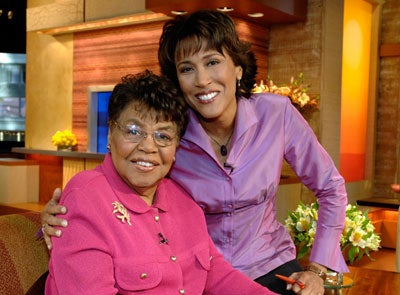 The first African-American leader of Mississippi’s Board of Education, Lucimarian “loved the written word and the poetry and joy of song,” according to the note circulated to ABC staffers. “She even recorded a CD of hymns for her family as a gift last year.” Mother and daughter once collaborated on a book called My Story, My Song — Mother-Daughter Reflections on Life and Faith.

Roberts, a breast cancer survivor, is on an extended medical leave from GMA, for treatment of the rare bone marrow disorder MDS.

Leave your condolences for the Roberts family.

On The Red Carpet With The ‘Insecure’ Cast At Th...

5 Times Justice Sotomayor Told Nothing But The Truth About T...