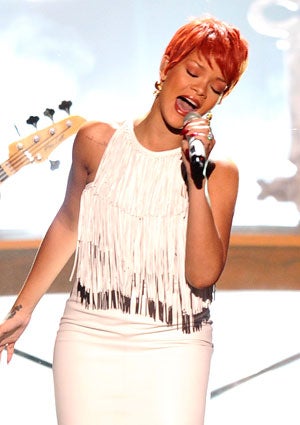 Rihanna took to Twitter over the weekend, spilling the beans on her collaboration with Britney Spears. The pop divas recorded a remix to Rihanna’s single “S&M” from her “Loud” album released last year.

Rihanna tweeted, “I got a #SEXY collabo comin your way supa dupa soon!!!! OH YEAH!!! By popular demand….” An hour later she revealed her collaborator: “@britneyspears one of the biggest worldwide popstars!”

“now that’s too much sex in the air Think u can handle it? You’re the only ones who can #3snaps”

Fans went bananas on Twitter and all over the web, making the news a trending topic for all of Sunday afternoon and this morning.

Britney Spears joined in the fun by replying: “@rihanna You’re such a tease! I like it, like it…. -Britney.” And later: “@rihanna You think they’re ready Ri Ri?… -Britney”

In addition to Rihanna working with Spears, Nicki Minaj also confirmed that she will join Spears on her North American tour this summer. The tour kicks off on June 17 in Sacramento, CA. With Britney’s high energy dance moves, and Nicki’s crazy hair and costumes, it is sure to be one wild concert. What other collaborations are you looking forward to this year?