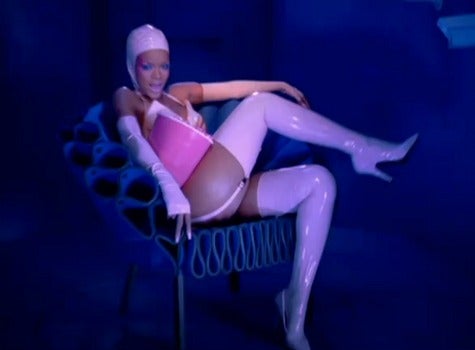 Rihanna has come under fire again, but this time not for singing racy lyrics or having fire engine red hair, but for allegedly plagiarizing themes and visual inspiration from famed photographer David LaChapelle. The work in question is her “S&M” video, which was recently banned in 11 countries for its hot lyrics and overtly sexual scenes.

LaChapelle is asking for $1 million for copyright infringement of “eight photographs conceived and created” on his behalf. It just so happens that his normal fee to direct a music video is also $1 million.

“I really like Riri — this is not personal, strictly business… musicians commonly pay to sample music or use someone’s beats and there should be no difference when sampling artist’s visuals,” said LaChapelle. According to his lawsuit, “S&M” allegedly copied his “composition, total concept, feel, tone, mood, theme, colors, props, settings, decors, wardrobe and lighting.”

According to CNN, director Melina Matsoukas, who is also named in the suit, agreed to direct the video and allegedly used storyboards that included LaChapelle photos — like one similar to the image still above.

You be the judge, did Rihanna and Matsoukas steal LaChapelle’s work?