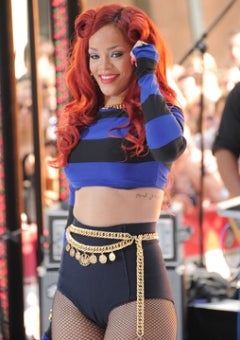 The firestorm that has erupted since Rihanna released her “Man Down” video doesn’t seem to be quieting down. Critics say the singer sets a bad example by encouraging rape victims to become violent toward their attackers. But Rihanna doesn’t see it that way at all.

The songstress went on “106 & Park” yesterday to defend her video as artistic expression and a platform for victims.

“We just wanted to hone in on a very serious matter that people are afraid to address, especially if you’ve been victimized in this scenario,” she said.

Rihanna added that the video should be viewed as art. “I didn’t go into it to make a controversial video,” she stated. “I wanted to make a mini-movie, something raw and artistic.” Before her appearance on “106 & Park,” RiRi took to her Twitter page to vent. “I’m a 23 year old rockstar with NO KIDS!” she wrote. “What’s up with everybody wantin’ me to be a parent? I’m just a girl, I can only be your/our voice!”