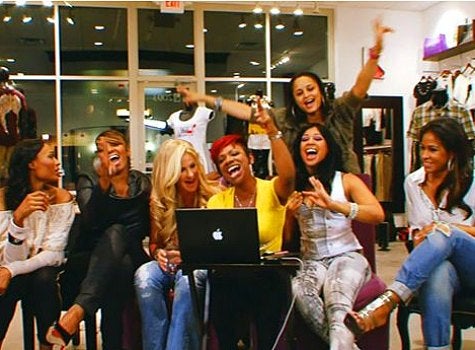 Super-sized tears, shrieks and male packages. This week’s theme on the “Real Housewives of Atlanta” was everything big (and dramatic). From Kandi asking the ladies about their “freak numbers” and bringing out a stripper named “Mr. Luscious” — whose manhood is so large that everyone shrieks when he whips it out. Kim’s daughter Brielle gets a big ol’ $3,000 diamond abstinence ring and NeNe and Greg have a blow-out of monumental proportions. Could this be the end? Find out what other moments had us screaming and crying super-sized tears (with NeNe) last night… What is your freak number? Things got a little saucy when Kandi invited the ladies over for a taping of her weekly web show, “Kandi Koated Nights.” After asking the girls what their freak numbers are, with 10 being the freakiest (and believe us, it’s hard for anyone to score a perfect 10) Kandi ups the ante by asking whether Sheree has ever peed on anyone. Clutch the pearls Kandi, what a super-freaky thing to do! Sheree reveals she’s a 9, while Cynthia gives herself a 6, and Kim (a 7) admits she’s okay with anal sex. “Anal is disgusting,” a visibly grossed-out NeNe yells. You’d expect NeNe to be the “freakiest” of the bunch, but come to find out she’s a real Southern Belle who gave herself a 3. Don’t you wonder what new mom Phedra’s “freak number’ would be? Is this the end? Greg and NeNe are in a really bad place and NeNe is ready for a change, so she visits a divorce lawyer. It doesn’t help that Greg’s conversation with a “friend” about spending $300,000 to make his wife famous is broadcast all over the internet. Now Greg is a respectable fella, but $300,000, really? Nene rightfully confronts him about it, and goes into one of the most precious NeNe diatribes (and there are many) we’ve seen yet. She yells:

If only Kandi could turn that into a song. That’s a woman’s anthem right there. But seriously, by now we know Greg isn’t a great communicator, and he does little to change this during their argument, simply saying, “I know you are so close to being done. I know it’s got to be some immaculate fibers holding you here.” Word is these two have yet to file divorce papers in Atlanta, and they do make a great team. Let’s hope they work it out. Are you a woman? Are you a doctor? Apparently Sheree isn’t woman enough for “Dr.” Tiy-E Muhammad. As the two face-off about his qualifications (or lack thereof). Tiy-E (Sheree said she’s dropping the “doctor” part so we are too — two snaps!) asks Sheree to prove that she’s a woman. Waving his PhD “transcripts” in her face, Tiy-E ends the courtship — but not before asking why a man has to feed a woman before he can talk to her. Somebody please give “Dr. Love” a refresher on Chivalry 101. Here comes the bride. Is Peter really ready to drop down the big bucks for his nuptials? Judging by their visit to an event planner (along with Cynthia’s gay BFF, celebrity stylist Kithe Brewtser), the wedding is going to be one Atlanta (and Peter’s checkbook) won’t soon forget. “I want my wedding to be perfect,” said Cynthia, “no matter what the cost.” We hear Peter obliged and made Cynthia’s dream a reality this past summer. Bringing home baby. Phaedra and Apollo bring home baby Ayden Adonis from the hospital, and they’re already at odds over what to call him. Phaedra likes Ayden, while Apollo prefers Adonis. Poor Ayden Adonis, all bundled up and adorable in a crocheted creation in that Georgia heat. But, oh, the offending outfit was created by a designer who has worked with the Big-O. “She has crocheted for Oprah so you know this is special,” says Phaedra, curbing any complaints Apollo may have of the outfit. What did you think of this week’s episode of “Real Housewives of Atlanta, and what’s your freak number?