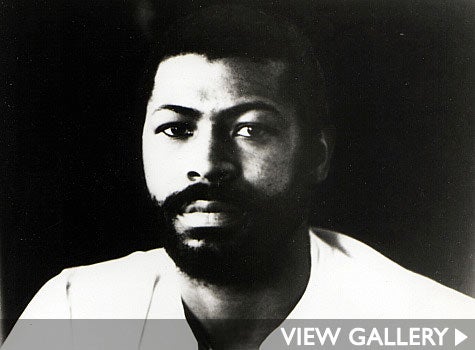 Teddy Pendergrass has died on January 13 at Bryn Mawr Hospital in his native Philadelphia. He was 59.

With his commanding baritone vocals and sensual lyrics, Pendergrass swooned the ladies and provided the soundtrack of our love lives.

Before gaining his sex symbol status, a young Pendergrass started singing gospel at churches in Philadelphia.  By age 10, he had become an ordained minister.  A self-taught drummer, Pendergrass began playing the drums for the Philly soul sensation Harold Melvin & The Blue Notes. By 1970, following the departure of the groups lead singer, Pendergrass took over at the helm, leading to the groups most profound success between 1972 and 1975 with chart-topping tracks like “If You Don’t Know Me By Now” and the socially conscious “Wake Up Everybody.”

In 1976, Pendergrass embarked on a highly successful solo career that began with a self-titled platinum debut followed by a string of gold and platinum selling albums. Best-known for his love ballads, he scored hit-after-hit with songs including “I Don’t Love You Anymore,” “Close the Door,” “Love TKO” and “Turn Off the Lights,” among them. The charismatic “Teddy Bear” as he was affectionately called, received multiple Grammy nominations (including one for his album “Joy,” released in 1993) and a host of awards.  He even appeared on the February 1979 issue of ESSENCE magazine.

But at the height of his success, Pendergrass suffered a spinal cord injury (SCI) following a car crash in 1982.  The early morning accident left him paralyzed and confined to a wheel chair.  But that didn’t kill his spirit. Pendergrass went on to record more successful albums and founded the Teddy Pendergrass Alliance, a non-profit organization that emphasizes quality of life over fixed circumstance.

The singer’s son, Teddy Pendergrass II, confirmed his father’s death to the Associated Press on Wednesday. Additionally, he stated that the elder Pendergrass experienced “a difficult recovery” after undergoing colon cancer surgery eight months ago.

Read an exclusive interview with producer and co-founder of Philadelphia International Records, Leon Huff, on the loss of Teddy Pendergrass.

Leave your condolences for his family here.