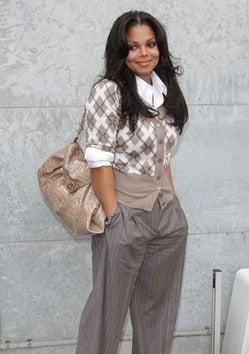 “Every great dream begins with a dreamer. Always remember, you have within you the strength, the patience, and the passion to reach for the stars to change the world.“–Harriet Tubman, abolitionist and humanitarian

Music: Janet Jackson releases “Number Ones,” a collection of Miss Jackson’s greatest hits. From “The Pleasure Principle” to “Rhythm Nation”, “Control” to “That’s the Way Love Goes,” you can have all of your favorite Janet songs on two discs or one download. “Number Ones” is available in stores and online today.

Film: “The Blind Side” is based on the true story about Michael Oher, a homeless Black teen who is adopted by a generous and well to do white family–self-discovery, evolution and cultural understanding ensue. Oher later becomes an All American offensive left tackle and then becomes a First Round NFL draft pick for the Baltimore Ravens. “The Blind Side” starring Sandra Bullock and Quinton Aaron opens in theaters today.

Film: “The Bad Lieutenant: Port of Call New Orleans” is a film about a troubled detective investigating the killings of five Senegalese immigrants in post-Katrina NOLA. Along with stars Nicholas Cage, Val Kilmer and Eva Mendes, there are also some new Black actors in the film like Denzel Whitaker (“The Great Debaters”), Brandi Colman (“The Vampire Diaries”) and rapper Xhibit. “The Bad Lieutenant” opens in theaters today.

Concert: Singers Tamia, Deborah Cox and Kelly Price united to form “The Queen Project,” a pro-social movement to empower women to use their voice to create change. The three sisters will be going on tour to spread their message and some good music. “The Queen Project: Tamia, Deborah Cox and Kelly Price” debuts at The Paradise Theater in the Bronx at 8:00 p.m. Ticket available on Ticketmaster.

*This week make sure to take care of what’s important in your life.