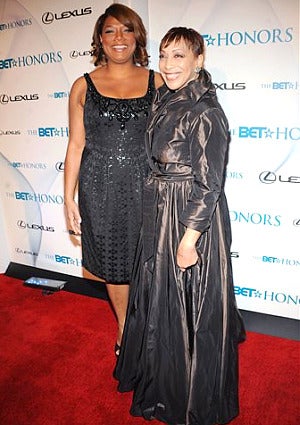 Mrs. Rita Owens is a legendary educator who has taught, nurtured and mentored hundreds, if not thousands, of students at Irvington High School…not far from the controversial Akoo Jeans bulletin board advertisements in Newark, New Jersey. “Mrs. Owens,” as she is affectionately and respectfully known by so many who have come and gone through her educational community, raised two outstanding children of her own. A son, Lancelot, Jr., who became a police officer and was killed in a motorcycle accident in 1992, and a daughter, Dana, who became an international superstar reigning over the music, television and film industries as the incomparable Queen Latifah. There is not an opportunity Latifah misses to affirm to her fans of all ages, particularly the younger ones who are trying to find their way in this world, that the “true Queen” is her mother, Rita Owens. ESSENCE.com reached out to Mrs. Owens for her insider take on the Akoo billboard controversy of this week, and how it affects the kids in her neighborhood. ESSENCE.com: Mrs. Owens, you know many of the young people who are the targets for the Akoo Jeans bulletin boards in Newark. What was your take on the controversy that built up in the past week? RITA OWENS: I started looking into this before the controversy had become a public discussion. My fiance has an office downtown in Newark, not far from the site of the billboards. He found them disturbing and brought them to my attention. So, I then read about the billboards, and yes, we have all seen many provocative displays in many areas of our culture but this seemed unusually so. I decided to go take a look at them firsthand. ESSENCE.com: What did you think when you went downtown and saw the billboards? OWENS: I really felt the image was of degradation. There was no room for denial, in my estimation, that this was a young girl performing oral sex on a young man. The implications of this image and its message go so far beyond selling jeans or clothing, and it’s not a good message, nor the right forum to be portraying sexuality for young people. ESSENCE.com: You point out the implications of these images being part of a bigger issue, a problem for communities and their younger members, like so many you have taught? OWENS: Yes, we have had an epidemic in our culture of young people being demoralized and desensitized by a sort of carelessness about their self-worth when it comes to their sexuality. Young girls have made statements in lots of studies, and I’ve heard it myself first-person, that oral sex is “not really sex,” that it doesn’t “count.” That’s an extremely upsetting place for our culture to be, when a young woman doesn’t put more value on herself, and her body. Creating a billboard that, in its own way, endorses her low self-esteem is not good for her, and it is not good for young men, either. ESSENCE.com: The critiques have mainly focused on the young women, but you point out that the young men are being negatively affected here as well… OWENS: Absolutely. For the boys, you’re building up pressure that he has to get these jeans to be cool, and at the same time you are pushing the young girl down, telling her the best role is to be subservient. To be less-than. It’s not healthy for either side. ESSENCE.com: TI owns the Akoo line… OWENS: Yes, and I really like TI. I have heard him speak and find him very interesting and I feel like he has a positive force that he shares with younger people. I am thinking he may reflect on this controversy and maybe change his mind about images like this. I just know that I would certainly wish him well in his business… ESSENCE.com: The desensitization of young girls and guys is something you worked hard to combat in your life. OWENS: The Irvington youth are like so many communities across the country, they have a lot of people, places and things that send them messages that they are not worthy, that their bodies are not to be valued, that their sense of self is not important. It is so critical to help them un-learn those beliefs. I just don’t want us, as a society, to get to the point where we don’t care enough about cultivating the dignity of young people. We put billboards in the sky that desensitize them further. But no one is noticing, no one is caring. We all have to take a part in guiding young women, as well as young men, to see their worth, to value themselves, nurture their talents as individuals, and then grow as a better community. A better world. For part two of ESSENCE.com’s interview with Rita Owens, we discuss her daughter’s successes, as Queen Latifah is being honored this afternoon at the Black Women In Hollywood luncheon. Read more: