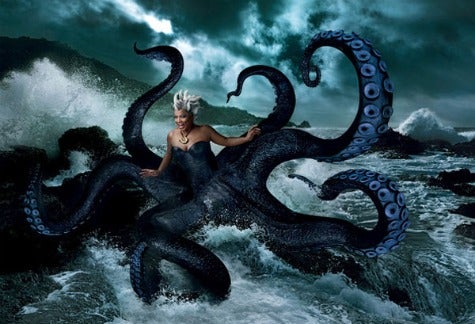 Queen Latifah is featured in a new Disney ad as Ursula, the sea witch from “The Little Mermaid.” A far cry from her glamorous CoverGirl persona, Latifah looks sultry as a sea villain, decked out in a black bustier with purple tentacles and a short, silver-streaked coif.

The new Disney Theme Park ads were shot by celebrity photographer Annie Leibovitz and feature other leading celebs such as Penelope Cruz, Olivia Wilde and Alec Baldwin. Queen Latifah’s whimsical ad will be published exclusively in a limited number of publications including the April issue of ESSENCE magazine.