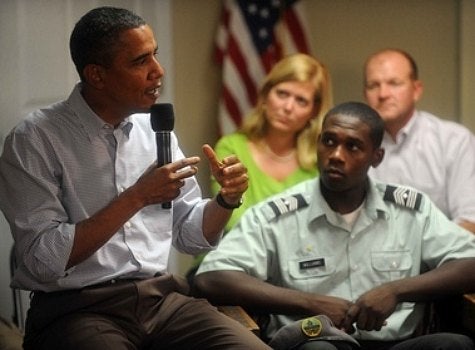 If you thought President Obama had lost his touch with young people, think again. So far this month, POTUS has announced his new-found appreciation for rappers Lil Wayne and Nas, appeared in an interview in “Rolling Stone,” and now he’s taking his message back to the lifeblood of his 2008 election (young people) by holding a live youth town hall meeting to be aired on MTV, BET and Centric on October 14th. Dubbed “A Conversation with President Obama,” the hour-long special will feature the president answering candid questions about his first term, his policies and future plans — for an estimated crowd of 250 young people. And just to remind us that he’s “with it,” viewers can also ask him questions via Twitter. The move to get more young people to the polls comes on the heels of a recent survey showing that young people are “satisfied” with the direction the country is moving under President Obama. But they’re also the least likely to show up to vote in this year’s mid-term elections. What do you think, will the youth show up to vote this time around?