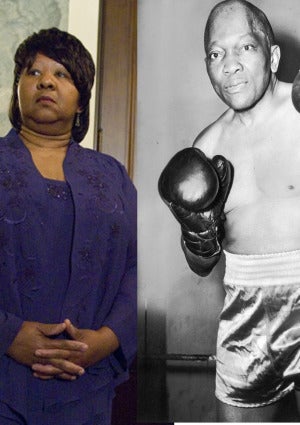 Jack Johnson, the first African-American boxing heavyweight champion, was one of the biggest celebrities of his day. With his success came flashy clothes, cars and the companionship of White women–and mounting White resentment. For traveling with a White girlfriend in 1913, Johnson was convicted under a law that prohibited transporting women across state lines for “immoral purposes.” Today, Arizona Senator John McCain and New York Congressman Peter King are urging the President to clear his name.

This year the Republican lawmakers sponsored resolutions for President Obama to grant a posthumous pardon for Johnson. The House and Senate passed the resolutions over the summer, but the President has yet to respond. In October, McCain and King pushed again, sending the President a letter encouraging him to “erase an act of racism that sent an American citizen to prison.” ESSENCE.com talked to Linda Haywood, 53, Johnson’s great grandniece, about the impact of the heavyweight champion’s conviction on their family, and why a pardon still matters all these years later.

ESSENCE.COM: How did this issue make it to Congress exactly?
LINDA HAYWOOD: I found out about Ken Burns’s documentary [“Unforgivable Blackness: The Rise and Fall of Jack Johnson”], and his petition to pardon my uncle in 2004 after I read about it in Jet magazine. I was very upset because I didn’t know who Ken Burns was, or what his motives were. Nobody had consulted with the family about it, so I was frustrated that nobody reached out to us. When I called his office, his producer apologized profusely. They did not know we existed. After corresponding with them, I found that Ken Burns has a passion for the subject of racism in America. While promoting his film about my uncle’s story, he started circulating a petition to say that he was unfairly convicted and deserves a pardon. Since Senator John McCain and Congressman Peter King were both amateur boxers, and they agreed that he was railroaded, they decided to rally around this cause.

ESSENCE.COM: Why is a presidential pardon for Jack Johnson so important to your family?
HAYWOOD: As a child growing up, I always knew my other family members were ashamed about what happened to him. I didn’t find out he was my uncle until I was 12, because nobody really talked about it. My mother remembers that, when he found out he was going to get in trouble, he came to her grandmother’s house and cried at the table. In our family we always knew it was wrong for him to go down because of whom he chose to live his life with, but there was nothing we could do about it. We had no money, no attorney, or anybody to speak for us. A pardon would mean a great deal to us because it would remove the stigma, the pain, and the shame we’ve felt as his family. We want his name cleared so we can have a more positive view of his place in history.

ESSENCE.COM: During his presidency, George W. Bush was also asked to pardon Jack Johnson but failed to act. When President Obama was elected, did you think you might have a better chance with him in office?
HAYWOOD: Yes, we did. We are hoping that since he is the first Black President, that he will take the step to do this. Since he’s only been in office for ten months, this is probably not a pressing matter. I recognize that he’s been inundated with much more important things. However, this has been passed by the House and the Senate, so I assume he would recognize that. And morally and ethically, it’s the right thing to do.