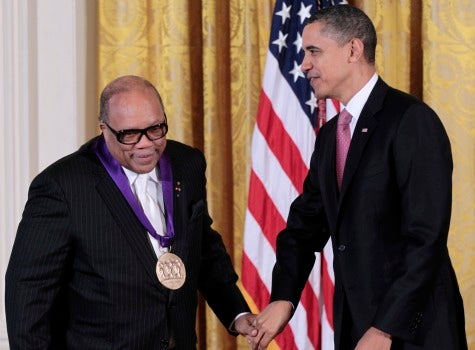 Today in the East Room of the White House, President Obama honored music legend Quincy Jones with the nation’s most prestigious honor for artists — the National Medal of Arts.

Jones joins the ranks of Aretha Franklin, Maya Anglou and Ella Fitzgerald with this award. According to the National Endowment for the Arts website, the medal is given to artists who “are deserving of special recognition by reason of their outstanding contributions to the excellence, growth, support and availability of the arts in the United States.”

For more than a half-century, Quincy Jones has been doing what he loves — music. He’s a talented conductor, arranger, record producer, instrumentalist, TV/film producer and more. He’s done work with legendary acts such as Sarah Vaughan, Duke Ellington and Ray Charles. This medal will top off an already impressive list of accolades including 76 Grammy nominations with 24 wins, an Emmy Award and seven Oscar nominations.

It’s only fitting that he be rewarded for his work after years of service to the music industry. Congratulations, Quincy, on a job well done.