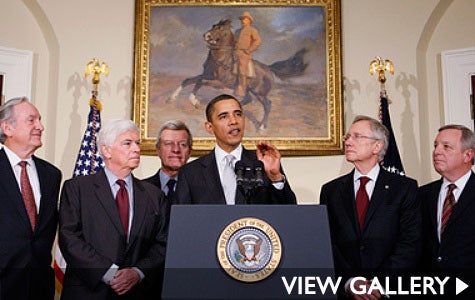 President Barack Obama heads to Copenhagen on Friday for the tail end of the United Nations Climate Change Conference, where world leaders are working at reaching a treaty to lower greenhouse gas emissions. African-American delegations from groups including the NAACP and the Joint Center for Political and Economic Studies, however, have already been there for the past week, representing the interests of Black America in the climate change debate. Green For All, which advocates for minority inclusion in the green economy, is also on the ground at the Copenhagen. Their CEO, Phaedra Ellis-Lamkins, talked to ESSENCE.com shortly before her departure about the importance of having diverse voices at the climate change conference table and what’s on the line for us.

ESSENCE.com: What will you be doing in Copenhagen?
PHAEDRA ELLIS-LAMKINS: The issues that communities of color in the United States are concerned about are really the issues that the world is concerned about. For example, access to fresh food and the cost of food–whether in Africa or in Detroit–is going to be very significant in the climate change discussion. So, in Copenhagen I’ll be advocating for food and land to be part of the treaty.

I also want to take the message of what’s happening in Copenhagen and translate it for the United States. Looking in the news over the past couple of weeks, there have been articles about being “Black and green” and what that means. But the Congressional Black Caucus is the greenest caucus in Washington, DC, and no one talks about it. It’s the only caucus where only one person didn’t vote for the climate bill. There is a real ability for African-Americans to take leadership and say that this isn’t a movement of certain people. This is really about our lives, our future and our economy.

ESSENCE.com: What do you mean specifically? Besides the food issue, what’s really at stake for us when it comes to confronting climate change?
ELLIS-LAMKINS:The fact that there’s still a debate about whether there’s global warming, while our communities are suffering the most, is shocking. We know that as a result of emissions and climate change, African-American children are less healthy. Our children are more likely to live near power plants and suffer from asthma. Then there’s a question of economic health, because there will be a green economy. There’s going to be solar and wind energy, but we have to make sure that those jobs offer opportunities to our community.

ESSENCE.com: What do you hope to see come out of the conference?
ELLIS-LAMKINS: China and India have already started to take bolder actions around clean energy, which means that the United States is behind in the green economy. So, hopefully the United States will begin to say, “All these other countries are paying attention, and it’s probably not because they’re environmentalists.” They’re doing it because it means their economies will grow, and they know that it’s not just about the survival of the planet–it’s about the survival of the people. We’ve got to figure out how to see this as our issue. I think it’s going to come down to young people and communities of color saying, “We refuse to be left out of this equation, and we’re not being left behind.”