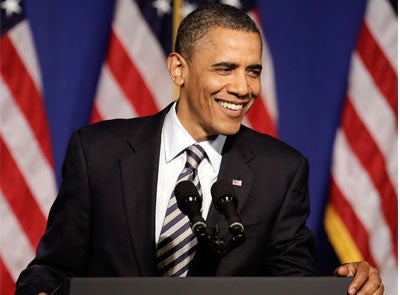 When you’re the President of the United States, each week is filled with dozens of issues vying for your attention, but this week, President Obama experienced some situations that were more intense than the usual. From having to prove his own birth to making staff changes to chatting with Oprah, and dealing with killer tornadoes, here’s the President’s week in review…

The week started off smoothly with Monday’s Easter Egg Roll. The 133rd celebration of this event featured more than just eggs and bunnies. There was fashion — Michelle Obama wore a flowered frock by Tracy Reese. And there were celebrities — Kimora Lee Simmons and her family and the Pinkett-Smiths attended. Willow Smith performed “Whip My Hair” for the 30,000-person crowd as Obama’s youngest daughter, Sasha, practiced doing just that.

Fast-forward to Wednesday and things turned a bit sour. President Obama released the long-form copy of his birth certificate in hopes of 1) silencing the rapidly growing birther movement spearheaded by Donald Trump and 2) bringing the nation’s focus back to important issues like the state of the economy. No such luck. Within minutes, Trump was back in the headlines demanding transcripts from Obama’s college days at Occidental and Harvard. While many people cited the birther movement as a form of 21st century racism, Obama focused on other matters. He selected Gen. David H. Petraeus to replace Leon Panetta as CIA director and named Panetta as secretary of defense.

That same day, the President and First Lady flew to Chicago to tape an episode of the Oprah show where the President discussed his birth again (the episode airs Monday, May 2). Later that night, he spoke at three Democratic National Committee fundraisers in New York.

On Thursday, Mrs. Obama hosted a “Take Your Child to Work” event for kids whose parents work at the White House. The kids asked her some questions about her favorite things. Highlights: her favorite book is Toni Morrison’s “Song of Solomon,” her favorite sport is tennis, and she thought meeting Willow Smith was “very cool.”

On Friday, the President touched down in Tuscaloosa, Alabama to appraise the damage after tornadoes flattened entire neighborhoods. More than 300 people were killed in the South. He signed a disaster declaration that will make federal funding available for recovery efforts.

Tonight, the First Family will travel to Cape Canaveral, Florida to witness the launch of the Endeavor space shuttle. The President finishes off the week by delivering the commencement address for Miami Dade College in Miami, Florida.

And how was your week?