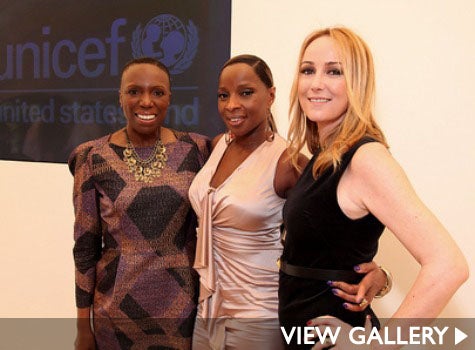 LA was the place to be last week with the 53rd Grammy Awards looming, so I packed up my little bags with lots of heels for a week on the dash and said goodbye to the chills of winter. So over it!  My calendar was on overload with Grammy style suites by day and super-hot events by night. I loved, loved, loved the ultra-pretty frocks by Lloyd Klein shown downtown LA not far from the Staples Center at The Recording Academy and Fashion Los Angeles Grammy Style Studio – too bad they didn’t show up on stage in place of some of the looks that did! Oh well…

Over at the London Hotel, just off Sunset, suites were in abundance, from the Grammy Style Lounge benefiting the African Millennium with actress CCH Pounder on hand and tables of great “takes” (from makeup to the most divine eyelashes) as well as the Red Carpet Event Green Grammy’s Gifting Suite in partnership with Music Saves Lives which showcased some hip, guilt-free picks.

Entertaining highlights kicked off with our Black Women in Music Awards featuring the phenomenal Janelle Monae and drew out everyone who’s anyone, from Diddy (who co-hosted) to Nia Long to Prince. Monae is in a class by herself — from her distinctive style to her precise moves — let alone the voice which champions all others in my book. The next night the town belonged to Usher who turned it over at The Red Campaign and Belvedere event held at the Avalon in Hollywood. This was great after that teaser at the Super Bowl which left me wanting more, more, more. Yours truly took it all in, resting my 4 inch Louboutins while sitting pretty behind the velvet ropes in the Belvedere corporate lounge.

Friday found me happily clicking glasses at the Unicef Women of Compassion Luncheon at a private estate in the hills where Gucci Creative Director Frida Giannini was honored for her passion and work on behalf of Unicef’s humanitarian efforts that is making a difference in the lives of thousands of children, particularly its “School’s for Africa” initiative which aims to increase basic education which is so needed. It was a fabulous tented affair and the prettiest day of the week, with puffy clouds and tempts in the mid-seventies which called everyone out to shine, including legendary fashion photographer Patrick Demarchelier, actress Camilla Bell, singer Marc Anthony and entertainment mogul Benny Medina. Mary J. Blige, who served as honorary event chair of the inaugural ceremony, looked absolutely stunning — in Gucci of course — as did the ever-gorgeous Jennifer Lopez who presented the award to a very humbled Giannini. All in all, it was just too fabulous for words!