Within the first two days of Donald Trump’s presidency, when newly minted Press Secretary Sean Spicer attempted to spin the president’s inauguration into something historic and later back pedaled, it was clear Spicer’s interactions with the press were going to be a train wreck.

An exhaustive study by Media Matters for America confirms what is probably apparent to any casual observer; as with any wild wreck, humans — and cable news outlets specifically — can’t help but gawk at the carnage.

“Among the major products that Media Matters produces data-driven studies looking at trends in media coverage. Given the Trump campaign’s open hostility to critical media outlets during the campaign — which has continued in the early months of the Trump administration — we thought it would be worthwhile to track how Press Secretary Sean Spicer dealt with the press on a day-to-day basis in a public forum,” Rob Savillo, Media Matters Research Analyst and author of the study told ESSENCE.

Here are some key takeaways from their report:

Cable news outlets are enamored with the Trump circus

Within the Trump circus, Sean Spicer is certainly one of its ringleaders, and he has become a celebrity in his own right because of it. Few people can probably identify the name Josh Earnest. He was President Obama’s Press Secretary for nearly three years. Yet, in a fraction of the time, Sean Spicer became a household name. Sure, Trump has established dangerous precedents with his propensity to lie and feed this misinformation to his press staff. So covering the Trump administration may seem more urgent. But it’s also likely that Sean Spicer’s blustery, combative style is an entertainment draw.

To put this in perspective, the three main cable networks — CNN, Fox News, and MSNBC — each aired 2 percent of Earnest’s press briefings. Yet, these networks have aired at least 93 percent of Spicer’s briefings.

“Media outlets can’t seem to tune out of The Donald Trump Reality Show even when it results in essentially broadcasting Spicer’s lies and combative tone toward the press unfiltered to their viewers on a near daily basis,” Savillo said. 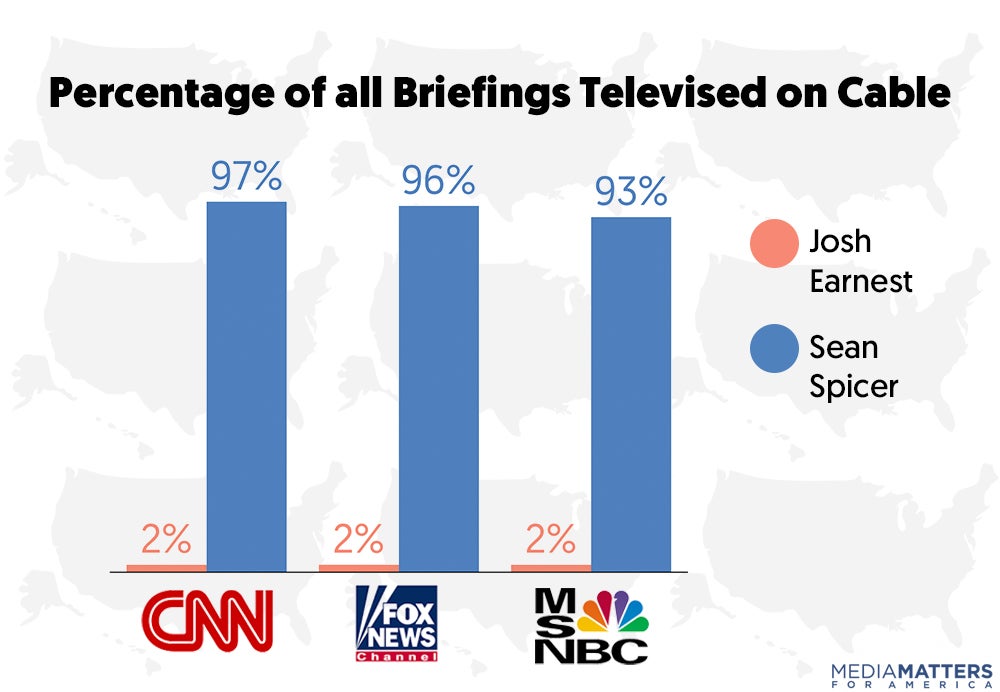 The daily briefings, which had historically been relatively mundane interactions between the White House Press Secretary and the Press Corps, have become must-see TV ripe for Twitter trending and comedy show parodying.

The Trump White House certainly entertains a disproportionate number of conservative outlets. In fact, all top five reporters who Spicer calls on the most in his briefings come from conservative news media. Still, Spicer grants them relatively few follow-up questions. In these cases, reporters are seeking to get clarity on an answer, and Spicer tends to cut the questions and the overall time for the briefings short. He provided the most frequently called upon reporter, John Roberts of the Fox News Channel, with 89 follow-up questions, and the top five most frequently called reporters were granted an average of 53 follow-ups.

On the contrary, Earnest’s frequently called reporters were ideologically diverse and he granted the most called upon reporter, Kevin Corke of the Fox New Channel, 251 follow ups. The top five reporters got to ask an average of 194 follow up questions.

“The press briefing basically went from a wonky, long-form question-and-answer session of detailed policy answers under Obama to regular arguments and interruptions in the Trump era,” Savillo told ESSENCE.

As much as Spicer and Trump lament “fake news,” they are keen on supporting reporters from news outlets who rely on un-sourced, unverified information. The top five most called upon reporters hail from Fox News Channel, Fox News Radio, Newsmax, Fox Business, and One America News Network.

The Society of Professional Journalists, the oldest organization representing journalists in America, promotes a Code of Ethics that is considered “the industry standard.”  Fox News has routinely and blatantly broken provisions of this code. With their speculative and bombastic reporting, Fox is among the original purveyors of fake news in the cable news era. Still, the Trump administration not only fails to include them in their sweeping critique of “fake news” coverage, but they rely on them for official policy positions. And they reward their correspondents with ample press briefing interactions with Sean Spicer relative to other mainstream news outlets.

Sean Spicer stepped away from the press podium for over two weeks beginning in mid-May. His time answering reporters’ questions continues to dwindle from an already paltry amount. He’s had briefings conducted in near-total darkness and just this Wednesday, upon his return, he conducted one banning cameras. So some outlets are now questioning the point in even continuing the charade.

Media Matters found that the number of days Spicer has briefed reporters has dropped dramatically since early April, with him having conducted only 12 briefings since April 11, the day he claimed that Adolf Hitler “didn’t even sink to using chemical weapons” in his bizarre critique of Syria’s president.

These briefings have been an average of about 36 minutes. Prior to that, his briefings lasted about 49 minutes. This contrasts Earnest’s briefings, which averaged nearly 1 hour and 20 minutes.

There may be another major shake-up in the press staff

With the resignation of Communications Director Mike Dubke and the limited time Sean Spicer has had lately with the White House Press Corps, it is likely we may see his role diminish even further. As Politico reported, the Trump team may be giving Spicer the Kelly Anne Conway treatment by forcing him in a corner and having him appear less in public, and it’s rumored the deputy press secretary Sarah Huckabee will replace him.

If these personnel changes happen, the press staff will likely still focus on conservative reporters, sidestep any substantive questions, and downplay their own reliance on fake news.

The only difference may be that the Administration’s press faux pas may be less entertaining to watch.