This story originally appeared in the October issue of ESSENCE.

While on the campaign trail in Las Vegas, Democratic presidential nominee Hillary Clinton sat down with ESSENCE Editor-in-chief Vanessa K. De Luca to discuss the issues that matter to us most and why she hopes to earn Black women’s votes.

ESSENCE: Thank you, Secretary Clinton, for spending time with ESSENCE. Let’s jump right in: In 2012, more than 70 percent of eligible Black women voters went to the polls and 96 percent of them voted for President Obama. How do you plan on energizing this bloc to vote for you in 2016?

HILLARY CLINTON: First, thank you, Vanessa. I’m delighted to be talking with you today. I think what’s remarkable and worthy of great attention is the percentage of Black women who vote. Black women understand [that] politics and government have a direct effect on their lives. I want to build on the progress that has been made under President Obama. I am absolutely unabashed in saying that I don’t think he gets the credit for what he’s achieved.

There’s a very clear set of issues that are particularly important to African-American women. I will continue to reach out to say, “Look, we’ve got to build on the progress. I can’t do it without you. I want to know what you need, and I want you to know that I’m going to do everything I can to respond to those needs.”

ESSENCE: In a poll we conducted with civic engagement group Black Women’s Roundtable last year, we asked our audience to tell us the top three issues they found to be the most critical in deciding whether they would vote for a particular candidate. The issues were affordable health care, living wage and college affordability. How can the middle class participate in the affordable health care plan in ways they are prevented from doing right now?

CLINTON: I was thrilled when President Obama got the Affordable Care Act through. I will be looking to see how we make it truly affordable so that the co-pays, the premiums [and] the deductibles don’t take such a huge chunk out of a woman’s or a family’s budget. Women are eligible for Medicare starting at age 65, but what about the women between 55 and 65 who are maybe facing health challenges but don’t have Medicare? What about caretakers, all the women who cut back on their work hours or stop their work life to care for a child, a spouse or an elderly relative? They are hurt when it comes to social security, so how do we take care of that? I want to look at this broadly to figure out how we help people get the quality affordable health care that everybody needs and deserves at different points in their life. 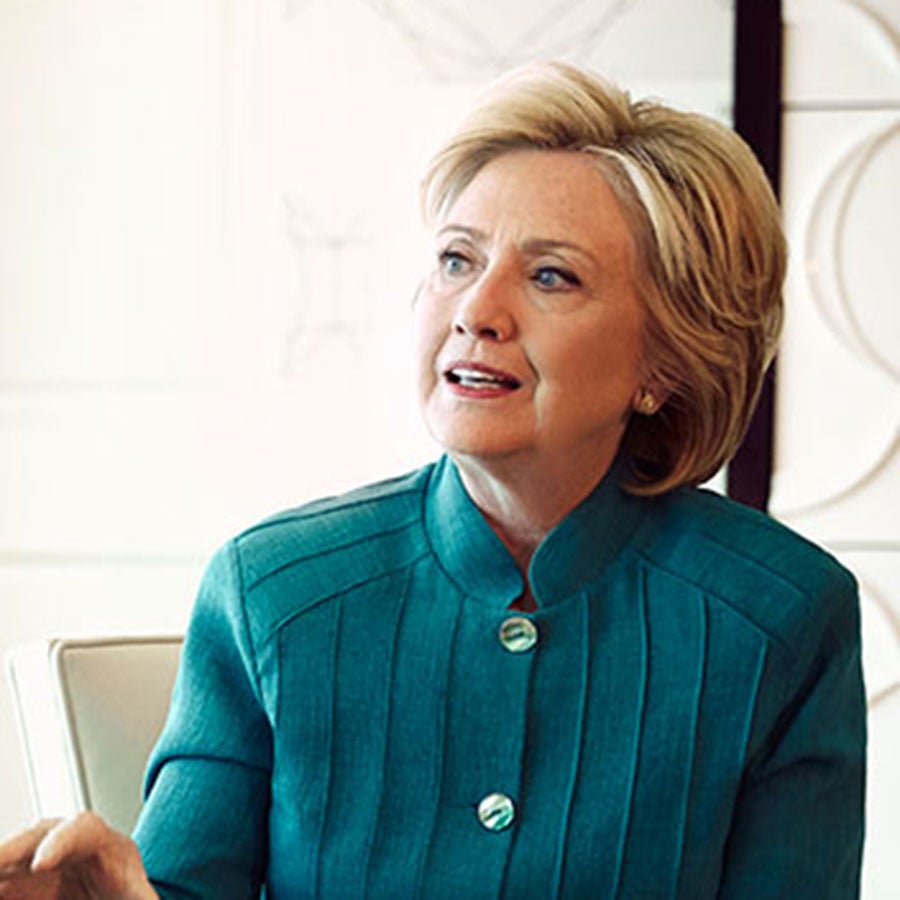 ESSENCE: Let’s shift to the second issue. Black women with a bachelor’s degree are making $10,000 less than the average White male with an associate’s degree. How do you plan to address the signi cant pay gaps for us?

CLINTON: More good jobs with rising incomes is the centerpiece of how we’re going to provide a higher standard of living for people. There is still too much explicit and implicit bias in employment, hiring and promoting that, again, disproportionately affects African-American women. I am in favor of raising the minimum wage, and support the efforts that have already been successful in New York and California to raise it to $15 per hour.
I want to pass the Paycheck Fairness Act so that you’re not retaliated against if you try to find out what you’re paid. Right now if you and I are working for the same company and we’re having lunch together and I say, “Well, I’m making X an hour or my salary is Y,” and you say, “But we’re doing the same job and I’m making X minus or Y minus,” we could both be fired for that.

ESSENCE: A lot of our readers are excited about your student loan plan. How will it assist those of us with college loan debt, especially those who attended historically Black colleges and universities?

CLINTON: From the very moment I rolled out my college affordability plan, I made it very clear that I wanted to get back to where we used to be, where it was possible for someone from a modest-income family to afford to go to college. I have a plan to make four-year public colleges and universities tuition-free. If you make less than $125,000 [a year], you should not have to borrow a penny to pay your tuition. I want to shift Pell Grants and other aid to help students pay for all their other costs.

I also have a really strong commitment to historically Black colleges and universities because of the role they have played in our country. I have a $25 billion fund set aside that will help HBCUs be competitive, be able to upgrade their laboratories [and] be able to provide more financial support to make sure they remain a viable option.

ESSENCE: Why is that important to you?

CLINTON: My first boss, Marian Wright Edelman, went to Spelman, and another great friend of mine, Vernon Jordan, got his law degree at Howard. I’ve had close friends talk about how that experience was so important in their maturing and that they felt very nurtured—challenged, but nurtured. I have visited a lot of HBCUs and the ones that are the public colleges and universities in a lot of states are being shortchanged when it comes to funding, so they’re having to close departments and buildings. It’s not that [these schools] don’t have the demand; they still do. They don’t have the resources. I want to provide a floor underneath them.

I have a plan to help refinance your debt, to get it paid down, to [ensure you] pay no more than 10 percent of your income for your debt and to provide relief. If you go into public service, and that includes teaching and law enforcement, we will forgive the rest of your debt after ten years.

ESSENCE: How will you deal with the ongoing issue of police brutality and racial pro ling should you be elected president?

CLINTON: I think there are four issues that we have to address simultaneously. One is policing reform and I think President Obama’s policing commission has excellent recommendations. What I intend to do is use the federal budget to incentivize and catalyze the 18,000 police departments we have in America to follow those kinds of recommendations. I want there to be national guidelines on the use of force, particularly lethal force, that every department would accept and that they would then train their police and hold them accountable. I want independent investigations of any police incident that results in the death of any person.

ESSENCE: Beyond a grand jury?

CLINTON: New York, after some of our regrettable, terrible incidents, made the right decision by legislating that the attorney general of the state would take over these investigations. I want to have a better approach to accountability and justice. I want to provide second-chance programs for people coming out of jail and prison, but I want to do much more to divert people from ever getting there in the first place. Honestly, that starts in preschool. You have too many young, Black kids, particularly young Black boys, being thrown out of school [with] zero tolerance for being kids. I want to replace the cradle-to-prison pipeline with a cradle-to-college or -career pipeline and really emphasize that.

ESSENCE: Obviously the country is in a very precarious state right now. There’s lots of division and failure to see the other side. How would you bring us all together?

CLINTON: I hope that by reaching out to people—especially across the aisle to Republicans as I did when I was First Lady, as senator and as secretary of state—I will demonstrate that I’m walking the walk as well as talking the talk. I know that it takes time and investment of your energy to build relationships, but there’s no substitute for that. I intend to begin doing that as soon as I possibly can.

This will determine what kind of lives we have and certainly what kind of lives our children and grandchildren will have. Are we going to be a fairer, more just society with opportunity for all, [one] that builds an inclusive economic prosperity that people can feel is helping them get ahead? Are we going to stand against discrimination, bigotry, bluster and bullying? Those are all core beliefs that I have about the kind of country that I think we must be and, in our better moments, we are.

ESSENCE: Should there be resistance, how will you push back against that?

CLINTON: I expect there will be resistance, but you have to work to find whatever common ground you can. I don’t know if you’ve seen the wonderful musical Hamilton but there’s a point where George Washington says that he’s going to step down and people are shocked. But he said, “It’s the right thing to do,” and then he said, “History’s eyes are on us.” I think history’s eyes are still on us. We’ve got to keep working together and that means creating common ground and common purpose wherever we can. There will always be naysayers; there will always be haters. We can’t let them drive our agenda. What we’re trying to do is so much bigger than them and so much more hopeful than they even understand. I’m going to keep reaching out, and based on my experience I think we can make progress.

A Look Back At Whitney Houston On The Cover Of ESSENCE Over ...