In the heat of the Democratic primary, the Black girls at Hillary Clinton’s Brooklyn headquarters huddled in the corner of the office to hear from a very special guest. Reverend Leah Daughtry, the two-time CEO of the Democratic National Convention, was a new face and name to many of the young Black women currently working tirelessly to elect Clinton.

We sat there, tired in the midst of a hotly contested primary, and listened to Reverend Daughtry tell us the story of The Colored Girls. And were transfixed by that story.

For the uninitiated, The Colored Girls are living legends in Democratic circles. In 1988, while staffers on the presidential campaign of Michael Dukakis, The Colored Girls—a group that includes Donna Brazile, Minyon Moore, Yolanda Caraway, Tina Flournoy, and of course Reverend Leah Daughtry—staged a protest after their office was moved, creating a power center on one floor and putting all of the people of color on another floor. The Colored Girls were not having any of it.

Knowing they needed to be as close as possible to that power center, they set up shop inside a conference room on the floor they had been told to move from and posted a sign on the door: “For Colored Girls Only, We Shall Not Be Moved.” And they did not.

They began working out of this conference room until the issue was addressed within the Dukakis campaign’s leadership. Eventually, the conference room became a central work space for all members of the staff, of all backgrounds. And it cemented their legacy forever.

The Colored Girls have always been in Hillary Clinton’s direct sphere of influence. They are her friends, allies, and champions. Now this same sisterhood is shepherding a new generation of Black women working to elect Hillary as the first woman president in history.

We are an extension of their legacy. 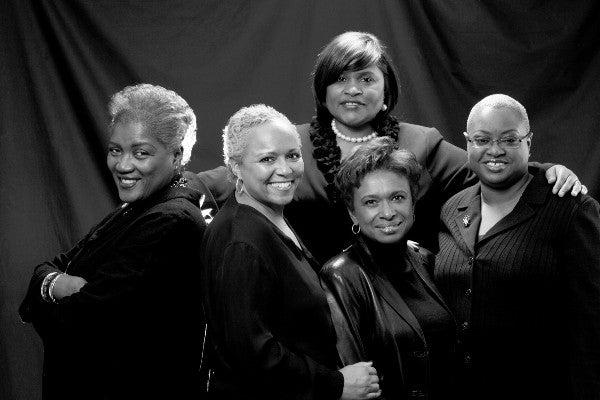 “And every single day, I think about the responsibility I have to my community and helping other women of color in politics. Without a doubt, I am here because of The Colored Girls.”

That sentiment is nearly universal among the Black women currently working to elect Clinton and improve the lives of women who look just like us. Brynne Craig, deputy director of states and political engagement told me, “Every day that I walk into HFA Headquarters I stand on the shoulders of The Colored Girls. Without them there would be no me.”

LaDavia Drane, deputy director, Congressional affairs, told me, “Some say what would Jesus do? In the campaign context, I say what would The Colored Girls do?” Ebony Meeks, regional surrogates director, told me, “The Colored Girls blazed the path that allows me to be where I am today. I don’t think they are done building their legacies, but I am honored to be a part of it and I hope to make them proud.”

“I absolutely see myself as an extension of their legacy,” Director of Engagement, De’Ara Balenger told me. “But also The Colored Girls see themselves as a legacy of Black women that have stood strong and boldly in democratic politics like Shirley Chisholm and Fannie Lou Hamer.”

“One of the greatest lessons I’ve learned from the colored girls is the imperative of supporting each other as Black women,” said Karen Finney, senior spokesperson and communications director for Senator Tim Kaine. Not every staffer had heard the legend before joining Team Hillary.

Joining the team immediately after graduating from LSU, Logan Anderson, Hillary for Virginia digital content lead, told me she didn’t hear the story of the Colored Girls until after a year on the campaign.

“They staged their sit-in five years before I was born! When they locked themselves in that conference room, these women created the space that I now occupy—a space that all young black women on Democratic campaigns now occupy.

They demanded to be heard and respected; that demand paved the way for people like us to be heard and respected today.” They carved out space for Black women in the political landscape and that power is finally getting the respect it long deserved. Before joining HFA as a Senior Policy Advisor, Maya Harris penned a paper for the Center for American Progress about Black women as engaged political actors with the power to determine electoral outcomes. That electoral power at the ballot box is something Black women on staff respect and work every day to honor.

As to why this particular election is critically important, our technology team’s Chief Product Officer Osi Imeokparia told me, “I am black, I am a woman, and I am an immigrant who just became a naturalized US Citizen in 2014. There really isn’t a single issue in this campaign cycle that doesn’t directly touch the communities I belong to. For that reason, it is important that Hillary Clinton is elected because it means we will have a President who ‘sweats the details’ and is steeped in the nuances of the policies that will directly impact my communities.”

“I represent the underdogs included in so many situations: As a woman, as a Black woman, and as a woman who is a first generation,” Design Lead Ida Woldemichael told me. “There is no doubt that there are a lot of reasons that the deck could be stacked against me.”

“It’s Hillary’s thoughtfulness combined with her humility and perseverance in the face of struggle, that has been an inspiration to me when I have met challenges or felt completely discouraged in this business,” New York Political Director Erin Stevens said.

“When I look around HQ and see all these amazing women of color in important roles, at the highest levels of this campaign,I know that it is something special, and it is a reflection of Hillary Clinton and her beliefs and what she is fighting for. Empowering women who have traditionally been disenfranchised.”

“My mother always said, ‘You may have many firsts in life, but make sure you’re not the last.’ The Colored Girls are an inspiration of what it means to put those words into action. The same is true of Hillary, who has spent her life trying to unlock opportunity for others, especially women and girls, and who I know will make that her mission as president,” Harris told me.

And in this election Black women cannot sit out. “Voting is not just a one person experience but a collective obligation that when not exercised leaves black people—and women—and so many others‚vulnerable and unempowered,” Tina Flournoy, President Clinton’s Chief of Staff told me.

“I have always known my sisters, The Colored Girls, get all of this. I know that though informed by different experiences, Hillary does too. She has never led a life on the sidelines. And Black women get that – because life has not afforded us that luxury either.” The Colored Girls have continued their work to better the communities they come from. “Always remember who sent you, that is to say, remember where you came from, who came before you, who opened doors for you, and who you represent.

Remember that you stand for all the Black women who can’t be in the room. Make it count. Make them proud to call you sister,” Reverend Daughtry told me. Yolanda Caraway told me she tries to teach young people coming up in politics to always give back to their respective communities and then pay it forward. “I am still always trying to find a way to encourage and help young people move forward in their careers, but to always keep the doors open for others,” Caraway says.

“I am so impressed with the young Black women who I have met this election cycle. From the convention to the campaign—these young ladies have blown me away.”

“When I entered into politics I had the honor and privilege of being mentored by some incredible black women. Dr. Dorothy Height, Dr. Maya Angelou, Rev. Willie Barrow, Coretta Scott King, Dr. Betty Shabazz, all icons and sheroes to many,” Minyon Moore told me.

“I saw first hand how unselfishly they worked on behalf of African Americans in general and African American women in particular. In observing them, I learned some very valuable lessons that I anchor into this very day. Public service is never about you, it’s about who you are willing to help along the way. Today as Hillary blazes yet another trail, she has hired some very talented and equally as committed young Black women in her campaign. They give you hope for the future and share the values that we all hold dear.”

It’s here, in the Democratic party, where Black women are shaping futures. We still have a long way to go in this ongoing struggle towards more equality, more rights, and more opportunities. And while we aren’t necessarily locking ourselves in conference rooms this election cycle, that sense of urgency still persists.

On Nov. 8, Black women are expected to make an impact on outcomes that could determine the destiny of an entire generation of Americans. We have the power to elect the first woman president. And as Donna Brazile, interim chairwoman of the DNC says:

And we shall not be moved.

This article originally appeared on Medium.com