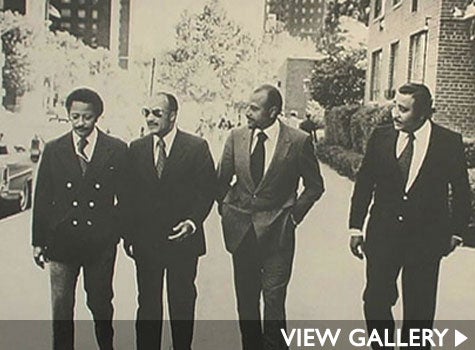 Percy Ellis Sutton was only 12-years-old when he left his hometown in San Antonio, Texas. He hopped on a passenger train to Harlem to start fresh. He attended Prairie View A&M, Tuskegee in Alabama and Hampton University in Virginia without ever receiving a degree. After War World II, on a G.I Bill, Sutton enrolled in Columbia Law School, and later transferred to Brooklyn Law School. The determined student held a position at the post office from 4 p.m. until midnight, then worked as a railroad conductor until 8:30 a.m. An hour later he was off to class.

Sutton later became the leader of a group of distinguished Harlem politicians known as the “Gang of Four.” The close-knit powerful quartet included attorney Basil Paterson, former New York Mayor David Dinkins and Congressman Charles B. Rangel. These impressive men, along with Governor Paterson, the son of Basil Paterson remembers their rock, Percy Ellis Sutton. In a telephone interview with ESSENCE.com, speaking with obvious deep emotion, Congressman Charles Rangel, said, “I loved him, very, very much and he loved all of us very, very much. And, through us living he will never die.”