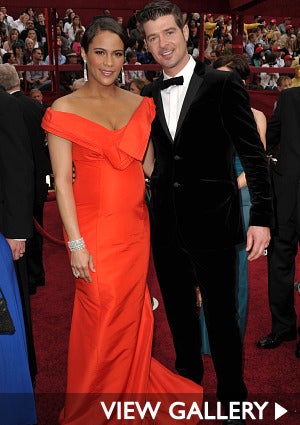 Congratulations are in order for Paula Patton and Robin Thicke who welcomed their first child, baby boy Julian Fuego, to the family on Tuesday, April 6, 2010 in Los Angeles. “Mother, father and son are all doing well,” Thicke’s rep told People yesterday. Fans watched “Precious” actress Patton elegantly sport her baby bump on a number of red carpets all through the latest award season, her motherly glow especially bright at the most recent  Academy Awards. In December, R&B singer Thicke gushed over his then-unborn son in an interview with ESSENCE.com, saying he looked forward to “teaching him how to respect a woman [and] teaching him music.” Their bundle of joy comes two months before Thicke and Patton celebrate their fifth wedding anniversary in June. Read More: