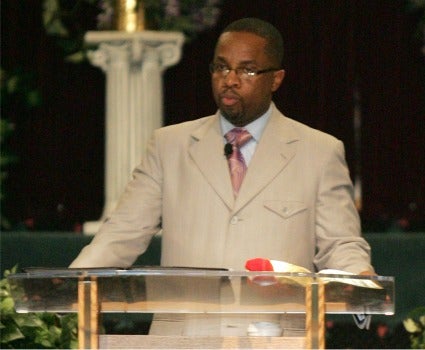 New Jersey pastor Cedric Miller, who ordered church leaders to quit Facebook because it made infidelity too easy, has offered to step down after news surfaced that Miller and his wife engaged in a little three-way action with another couple at church. It’s hard to keep things buried in the digital age. Miller’s news-making comments about Facebook prompted the “Asbury Park Press” to shed light on a 2003 court trial when the pastor testified that his wife had an affair with a male church assistant and that he (Miller) and the man’s wife were often present for the sexual encounters. “I mean between the four of us,” Miller testified. “It was just, I mean there was touching, there was … it was crazy, it was as wrong as wrong could get. Yes.” “Okay it was sex, correct?” a lawyer asked him. “Yes,” Miller replied. In an energetic sermon at the Living World Christian Fellowship on Sunday, Miller offered to step down if church leaders disapproved of him and continued his campaign against Facebook, warning members of the temptation to use the social networking site to reconnect with old flames. “The only way the past is going to stay the past is if you bury it once and for all,” Miller said. Too bad he couldn’t do that with his testimony. The testimony was given during a criminal case against the church assistant that was later dismissed. According to the “Asbury Park Press,” the three-way affair occurred 10 years ago.