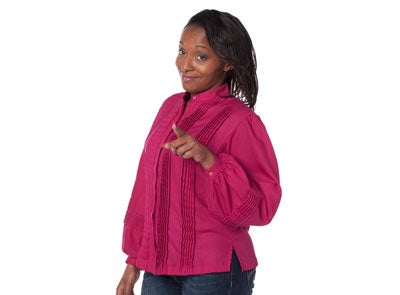 Riding the Metro here in beautiful Washington, DC is fast sometimes, nerve-wracking frequently, but good for a story always. A few days ago, I managed to wrangle a seat when a band of loud, obnoxious teenagers — and y’all already know they were Black — got on the train just a-carryin’ on. They tussled, they cussed, they hollered like they were at a barbecue in the park, not on an itty bitty train car in the early rush hour commute. I was glad they were having fun but they were cramping my style.

I could also tell from the faces of other passengers, including several older folks who looked like they would rather get out and slow walk over broken bottles than be stuck next to those hooligans, that we were basically hostages to the kids’ bad behavior. I held my peace — for a while. But when a girl called a lady her mother’s age a bitch for bumping into her while she was squeezing through to exit, I had to let loose.

“Uh-uh,” I barked. “You can’t be talkin’ to grown folks like that. You ought to be ashamed of yourself. What y’all need to do is have some respect for yourselves first and foremost, and the other people on this train, and quiet down. You can enjoy yourselves and still be polite to the people around you.”

I glared all the way back down into my seat, half expecting someone to hit me with a Pacquiao punch from the back. Instead, they did just what I asked them to do. I don’t know about the respect part, but they lowered their voices at the very least.

I admit I’m a one-woman army against bad kids. My friends joke that someday, one of these giant sequoia teenagers is going to give me the ol’ ground and pound. Y’all are making this New Millennium Model of Teen mighty big. They might tower over me, and their parents might think I’m out of line, and I may embarrass my own daughter, but let it be known: I will check your kids if they ain’t acting right. So raise ’em good or don’t let them out on the streets. I still believe it takes a village to raise a child. And dangit, I am the village.

I grew up in the 80s in a community. I love that word: com-mun-it-y. Which means, it was more than a neighborhood where people lived next door to one another, trudged home from work at the same time and maybe nodded a greeting. I knew the gay couple next door. I knew the single guy in the basement apartment. I knew the older lady upstairs. They knew me and my mother. So trust if I was ever foolish enough to pull a stunt, she got a full report about it before she stepped into the house. That was the part of being in a com-mun-it-y that I hated. Back then.

But now, as I see more children running wild on the train, in the store, on the streets, what kind of person would I be if I didn’t say something to keep a bad situation from getting worse? I don’t believe anything happens by coincidence. Not to get all spooky, but I think people are placed in scenarios on purpose, specifically for that place and time. It might be that I have in me the very words that need to be said to change the trajectory of a course of events.

I’ve told young ladies they were too beautiful to have such ugly words coming out their mouths and checked young men for letting their whole behinds droop from their pants. It all comes from love. Once in a while, they roll their eyes. But so far, so good: I’ve never been cussed at or beaten to a bloody pulp. And as much as I dole out “don’t do that’s,” I also give out praise and high-fives. All in a day’s work when you’re the village.