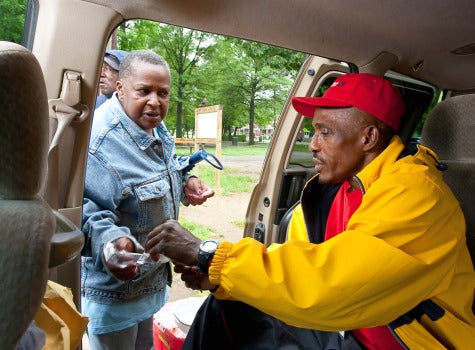 There are two Washington DC’s–the Capitol that is reflected in the media, and the other that is never talked about–the city with a ballooning HIV/AIDS rate, which is the highest in the United States. On April 26, in a packed room at the Ninth Annual Tribeca Film Festival in New York City, hundreds were glued to the screen, as the raw, tear-jerking documentary “The Other City” highlighted testimonies of people living with HIV/AIDS. Lawmakers, community activists, journalists, and public health officials were also featured expressing their concerns over the pandemic, such as the importance of the government allowing the exchange of used needles for clean ones to help lower the risk of spreading the virus. After the film, several panelists–such as the director, Susan Koch, US Surgeon General Regina Benjamin, Women’s Media Center President Jehmu Greene, journalist Jose Antonio Vargas, and amFAR Chairman Kenneth Cole–lined the stage to discuss the film’s topic, while CNN’s Roland Martin moderated. Dr. Benjamin, dressed in uniform, said she had a hard time watching the documentary because it hit home. “My brother died of AIDS a few years ago,” she said looking directly to the audience. Adding, the film is still good to watch.    “The Other City” was produced by entrepreneur and philanthropist Sheila C. Johnson. “I wanted to really put a human face to this disease so that Americans can see real people and what the real suffering is all about,” explains Johnson. “I think we, as a society, and the media tend to trivialize the pain and suffering that these people are going through. I think it is not just in Washington, I think that every city is really divided into two: you have the affluent, powerful side, and then you have those people that are living in poverty in the shadows.” She continues, “I would like this movie to become the educational tool and the wake-up call for Americans across this nation. I want to put this debate back in the hands of Congress to start passing laws on needle exchange and for them to stop thinking that this disease is going to melt away.” Related stories:
Loading the player...