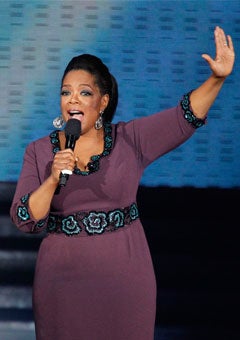 I am not one of those people who equates “criticizing” or “simply not being a fan” with hatred. You don’t have to like Oprah just because she’s wildly successful and a global humanitarian. Really, you don’t. However, it’s impossible to deny the fact that this woman has done a lot to help people across the world, including many of her Black brothers and sisters. Yet some of us just can’t find the words to say anything nice about the mogul. But why?

For years, I’ve heard folks (mostly brothers, sad to say) go IN on Oprah, as if she were the enemy of the state. 50 Cent called himself taking her to task for not being a big supporter of Hip-Hop (despite featuring Kanye West, Common, Will Smith and Jay-Z on her show) and went so far as to name a pet dog after her. You mean to tell me that she’s a b*tch because she didn’t go out of her way to give Rap music a platform on a show that was largely watched by White stay-at-home mothers? Give me a break, Curtis.

Oprah did take on the issue of sexism in Rap music in a 2009 episode that was criticized for featuring Common as the sole rapper present; I’ll be the first to admit that the discussion certainly left one wanting more. But for all the other channels we have to discuss Hip-Hop, there was never any reason for us to demand that it was done on the Oprah show. I can’t understand why someone would be angry at a Black woman in her 50s for not being head-over-heels in love with an art form that routine assaults the psyches of young, mostly-Black women.

Oprah’s decision to open schools in Africa has also been highly criticized by folks who think that she would have done better to create institutions here in the States. A writer I know recently posted a link to a story about her $1.5 million dollar donation to build schools in Zimbabwe and said, “Charity begins at home… suck it, Sofia.” Mind you, the children in this particular village were going to a school with a hole in the ceiling so big, they had to sit against the wall when it rained. And Oprah’s doing some sort of disservice for helping these little brown babies? I won’t even speak to how unfortunate it is that some of us are so dissociated from Africa that they would suggest that these children aren’t our own people.

While I understand that people took offense to Oprah’s comments about spoiled American children, she isn’t wrong in highlighting the fact that most children here do have better school options than the children she’s aided abroad. Speaking of American schools, do Oprah’s detractors know that she has given millions to schools right here in the US? Including a million-dollar donation to Providence St. Mel, a successful private school that educates Black kids in a struggling area on Chicago’s West Side? Speaking of Chicago, Winfrey has supported seventy-plus organizations in the Windy City, a number of schools and organizations that serve predominately African-American children.

Oprah represents a level of achievement that most of us cannot even fathom. And while you may find her talk show to be a bore or simply not your taste, I think the woman has earned our respect. She has made good living and she has touched countless lives. We probably won’t even know the full extent of Oprah’s generosity until she herself is long gone. Let the Oprah hate go and give credit where credit is due.

The Jordan Brand Announces 20 Year Partnership with Howard U...

Bridal Bliss: Natasha And Michael's Wedding Was The 'Bashmen...