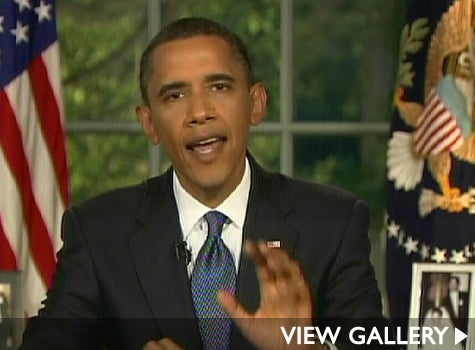 In his first Oval Office address to the nation, on Tuesday night President Barack Obama struck a terse but optimistic tone on recovery efforts in the Gulf Coast oil spill. For 18 minutes he emphasized the government’s leadership in the crisis, laying out what happened, what’s being done, and what comes next — with a timeframe. When an exploded BP drilling rig began leaking millions of gallons of oil into the Gulf in April, it set-off the worst environmental disaster in U.S. history. Conceding that current technology is unable to contain a leak of such unprecedented magnitude, the President also maintained that the nation’s best scientists are on the challenge and directing BP on equipment needs. “In the coming days and weeks, these efforts should capture up to 90 percent of the oil leaking out of the well,” he said. “This is until the company finishes drilling a relief well later in the summer that is expected to stop the leak completely.” Acknowledging the personal cost of the crisis, to shrimpers, fishermen and restaurateurs, Obama expressed his commitment to seeing that their way of life is not lost. “Tomorrow, I will meet with the chairman of BP and inform him that he is to set aside whatever resources are required to compensate the workers and business owners who have been harmed as a result of his company’s recklessness,” he said. An independent, third party will control the fund to ensure fairness, and the Administration will also develop a long-term plan for Gulf Coast restoration. The federal government itself was not let off the hook, however, for blindly rubber-stamping whatever the oil industry wanted instead of closely regulating it. To more efficiently clean up corruption in the Minerals Management Service, the agency in charge of regulating drilling and issuing permits, the President will create a new office over the next few months to “act as the oil industry’s watchdog — not its partner.” Finally, the President issued a call to action around breaking our dependence on oil and developing a comprehensive clean energy plan. “For decades, we have failed to act with the sense of urgency that this challenge requires,” he said, pointing out that while the House acted last year with an energy and climate bill, the legislation has stalled in Congress. “The consequences of our inaction are now in plain sight.” To avoid overly politicizing the issue, he welcomed all ideas from both political parties. “The one answer I will not settle for is the idea that this challenge is too big and too difficult to meet,” he said, before returning his remarks to the struggling community of the Gulf. “This nation has known hard times before and we will surely know them again. What sees us through — what has always seen us through — is our strength, our resilience and our unyielding faith that something better awaits us if we summon the courage to reach for it.”