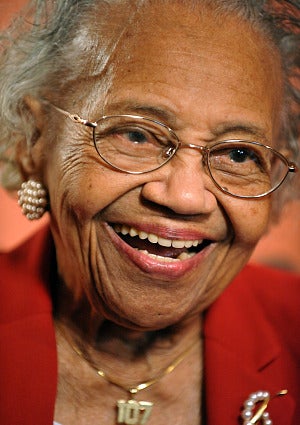 Ann Nixon Cooper, the elderly Black woman who garnered national attention last year when then President-elect Barack Obama thanked her in his post-election acceptance speech, has passed away at age 107. Relatives say the Atlanta resident, who was born just one generation past slavery and voted for the first African-American President, died peacefully in her bed on Monday afternoon.

U.S. Presidents occasionally say a word when the nation loses a renowned celebrity or other distinguished figure, and today President Obama remembered Cooper with a statement.

“Michelle and I wish to express our deepest condolences on the passing of Mrs. Ann Nixon Cooper,” the President said. “From her beginnings in Shelbyville and Nashville, Tennessee to her many years as a pillar of the Atlanta community, Ann lived a life of service.”

The charitable activities of Nixon’s remarkable life include founding the Girls Club for African American Youth, serving on the board of directors for the Gate City Nursery and working as a tutor at Ebenezer Baptist Church. She was also a wife, mother and grandmother.

“Over the course of her extraordinary 107 years, Ann saw both the brightest lights of our nation’s history and some of its darkest hours as well,” the President continued. “It is especially meaningful for me that she lived to cast a vote on Election Day 2008, and it was a deep honor for me to mark her life in the speech I delivered that night. It was a life that captured the spirit of community and change and progress that is at the heart of the American experience; a life that inspired – and will continue to inspire – me in the years to come.

“During this time of sadness, Michelle and I offer our deepest condolences to all who loved Ann Nixon Cooper. But even as we mourn her loss, we will also be rejoicing in all that she meant for her family, her community, and so many Americans.”

Cooper wrote a book after being acknowledged by the President, entitled  “A Century and Some Change: My Life Before the President Called My Name.” The book is slated for a release on her birthday in January.