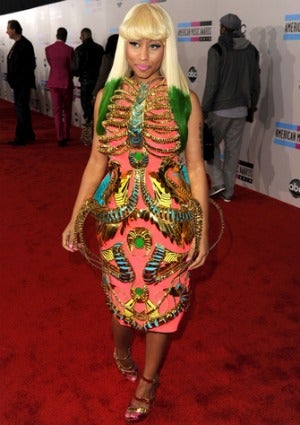 Ever since a certain Barbie hijacked Lil’ Kim’s notorious crotch shot for the cover of her sophomore mixtape “Sucka Free,” there has been a lot of ish talking. As the attention-stealing featured artist on smashes like Ludacris’ “My Chick Bad,” Dirty Money’s “Hello Good Morning” remix and Kanye West’s “Monster,” this has undeniably been the year of Nicki Minaj. But behind the Technicolor tresses, the animated accents and seemingly inflatable parts, the question still remains, can this femcee hold her own? Today Miss Minaj puts her young money where her mouth is with her debut album, “Pink Friday.” And she just might surprise you… As if her uniquely animated spitfire flow isn’t in enough rotation, “Pink Friday” supplies an abundance of potentially infectious hit singles that will have you mouthing the words in no time. Feel-good tracks like “Check It Out,” featuring Will.I.am and “Blow Your Mind,” do just what they are supposed to. While tracks like “Blazin” feat Kanye West and “Last Chance” feat Natasha Bedingfield will feed Nicki’s ever-growing pop-loving band of Barbies. Still, there’s something for the ride-or-die Nicki fans that have been around since she was just a Queens girl working the mixtape circuit. “Dear Old Nicki” is perhaps one of the most introspective tracks. The song is Nicki’s requiem to herself — or the less commercial persona of Nicki Minaj that many underground music lovers came to know and love. It’s surprisingly cerebral. Minaj surprises again with “Save Me,” a pensive example of just how multi-dimensional Nicki has become. The contemplative track crosses genres and sounds more like spoken word than the signature spitfire flow we’ve come to know. While tracks like this convey Nicki’s complexity, others like “Fly,” featuring Rihanna and “Moment 4 Life” featuring Drake, are a celebration of how far Nicki has come, and as a listener, one cannot help but celebrate with her. Still she’s the only girl with the keys to the boys club. With features with Drake, Kanye, Eminem and Wll.I.AM, her access may be just the reason why the jury is still out on darling Nicki’s ability to hold her own. Sure she barks with the boys, but can she sonically hold our attention on her own? While we would opt for less of Nicki’s auto-tuned vocals, one cannot deny that true to the character she is, Nicki plays out her emotions in a two-act play called “Pink Friday.” And she commits to the act. She sings. She spits. She animates. She plays ventriloquist. Undoubtedly, she’s good at a lot of things. But in the end, what she does best is entertain. “Pink Friday” does not disappoint. It entertains.