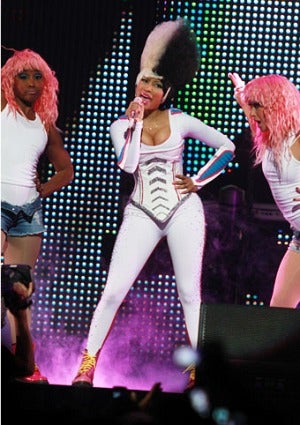 Nicki Minaj may take a break from her rainbow-colored wigs and pink Fridays to launch an acting career. The Queens-born rapper is allegedly a top choice for a role in the film adaptation of “Charge It To The Game,” a best-selling novel by Michele A. Fletcher, Bossip.com reports.

The book follows a female Brooklynite trying to make a name for herself in the crime-filled streets of Brooklyn. If interested, Minaj may join a superstar cast of musicians Fletcher feels could enliven her character. Some co-star candidates include fellow rapper Eve, R&B singer Keri Hilson, Why Did I Get Married actress Tasha Smith, Evelyn Lozado of Basketball Wives, and (dare we say) rap-enemy Lil Kim.

This would be Minaj’s second role in a film. She first starred in a 2009 low budget independent film called “Stuck On Broke” just before the launch of her music career. She’s also made a recent comedic splash on Saturday Night Live.

What do you think of Nicki Minaj starring in a film – good idea or no?