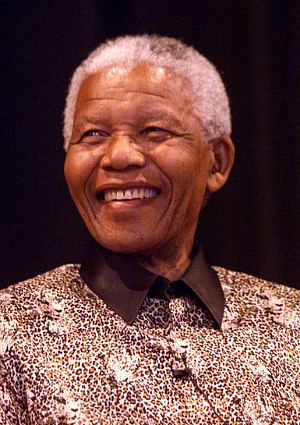 Former South African president Nelson Mandela is reportedly recovering from a collapsed lung and will be released from a Johannesburg, South Africa hospital as soon as Friday.

Word surfaced on Wednesday that Mandela was admitted to a local hospital for “routine tests.” Reuters News Wire is reporting that Mandela was treated by military doctors. “President Mandela is comfortable and is well looked after by a good team of medical specialists,” said current South African President Jacob Zuma.

The African National Congress is doing it’s best to ease concerns of Mandela supporters. “He’s a 92-year-old and will have ailments associated with his age, and the fact that he stayed the night should not suggest the worst,” said spokesman Jackson Mthembu. Additional comments are flowing from The Nelson Mandela Foundation, “He is in no danger and is in good spirits,” said the foundation.

It’s not hard to forget but just a short seven years ago in 2004, at the age of 86, Mandela announced that he would retire from public life. He famously said, “Don’t call me, I’ll call you.” Few were able to catch a glimpse of him during his last public appearance at last year’s World Cup Final.

All eyes are on South Africa as the world is waiting for good news about Mandela’s health.