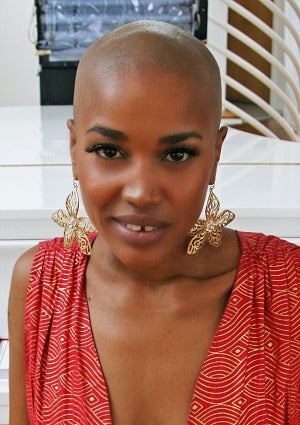 Natalie “The Floacist” Stewart, the London-born slam champion and singer who, in 2002, graced the R&B scene as one half of Floetry, reemerges this November with her solo debut–Floetic Soul. The album, which features a bevy of veteran linguists (among them, Musiq Soulchild, Lalah Hathaway and Raheem DeVaughn), is a unique elixir of sensual lyricism and earthy soul. Stewart recently spoke with ESSENCE.com about the personal walk she’s been on these last five years, her relationship with former group-mate Marsha Ambrosius, and what fans, old and new, can expect next. ESSENCE: I want to start with the most obvious change, physically, at least — your hair. Is this somehow symbolic of a new beginning? NATALIE STEWART: I actually cut my hair in 2006. But it is a statement, no matter how you look at it. There is a very personal walk with having your hair in different ways; it’s representative of who we are in different phases. I feel very fresh, very clean, very naked, very transparent. ESSENCE: How does this transparency translate into the new direction you’re taking with your solo debut, “Floetic Soul”? STEWART: What’s really nice with this new direction is it’s actually an embellished direction — it’s the embellishment of being an artist, the age of maturity, life, what all of those things can add. What people know Floetry for is poetic delivery with musical intent and what’s new about this record is no one has ever heard me do solo music; it’s a concentrated opinion coming through modernizing. I’m exploring myself and the transparency comes from me getting out of my comfort zones. It’s an important record to me, creatively. I feel very full, very fortunate. ESSENCE.com: In a statement you said the “Floetic concept had not come to an end, even though my group, Floetry, had completed its cycle.” What do you mean by Floetry completed its cycle? STEWART: When Marsha and I started the recording part of Floetry we were pretty much in agreement of a three-album concept — Floetic, Floacism and Flo’Ology. We were always aware that after the third that there was going to be a reevaluation — it might have been that we made another three albums; it might have been that we went solo and did an Outkast thing. The cycle of the presentation of Floetry got to the point where people were starting to attempt to make it cross over and be bigger and dumb it down; the pure essence of what it was and how it came about was starting to be tampered with. ESSENCE: What’s your relationship with Marsha now? STEWART: Marsha and I aren’t on speaking terms. We’re not friends. We’re sisters because the universe blessed us with something, which is broader than friendship. We haven’t communicated in quite some time. We’ve been on different paths for a while. Do we support each other’s careers? We can only support each other’s careers no matter what we do. But no, we’re not friends. But that’s my sister.   ESSENCE: Do you find it harder to make solo music without a constant collaborator? STEWART: I don’t find it harder. I wasn’t born a twin [laughs]. I’ve always had my own individual walk. What I have found is that I did want to give [Floetic Soul] the respect and the time of experimentation and growth to be able to get to a point where one finds oneself. I really have been enjoying this experience; it’s been quite divine. It’s been more than just music for me; it’s been something that’s embellished my life. I’ve grown as a human being, as a woman, and I’m really grateful for that. I mean, we’re all growing; no one story is greater than the next. I’ve been on quite a unique journey. Natalie “The Floacist” Stewart’s debut album “Floetic Soul” is in stores today. What’s your favorite Floetry song?