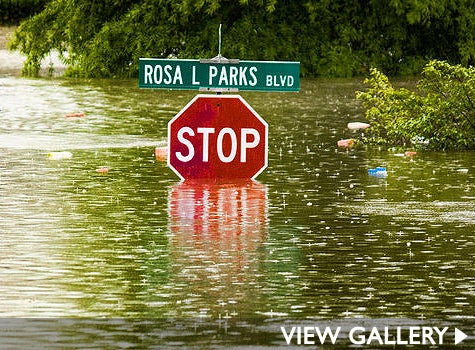 In Nashville, Tennessee, the floods have left thousands of residents without shelter. State officials are advising people to conserve their water, students have gone days without attending school, and now many people without flood insurance are faced with colossal financial burdens. “We did not see this coming,” says a frustrated Laini Brown in a telephone interview with ESSENCE.com. “We need help.” Brown spoke to ESSENCE.com about the suffering of many people in her town, why they are being overlooked, and who she thinks is stepping up. On Nashville getting little media coverage. “Between the bomb scare in New York City and the oil spill in the gulf, the Nashville floods have not gotten the attention they deserve. There are people here that are displaced and have lost everything. We need help.” Why Americans should be concerned, too. “Nashville is a mecca of education: we have three Historical Black Colleges & Universities as well as several large universities. Nashville is also a major tourist destination but the floods have devastated most of our major attractions.” The brighter side. “The one good thing about Nashville is that it is the “Volunteer State” and people have stepped up to volunteer, we are really taking care each other right now.” What no one is talking about. “I know several people whose homes did flood. Everybody knows somebody who has been affected by this. The West Hamilton community, which is predominantly an African-American community, has been totally devastated by the storm.”
Loading the player...