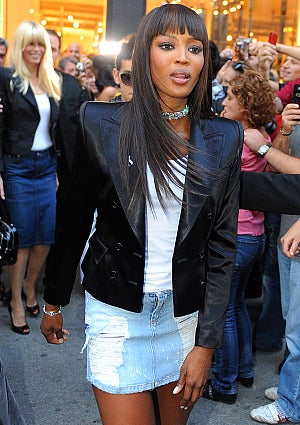 UPDATE 3/4/10: The driver that accused Naomi Campbell of attacking him while she was seated in the back seat of the car that he was driving has dropped the assault charges he filed against the supermodel. According to NY Daily News, the driver Miodrag Mejdina decided not to press charges and instead let Campbell’s alleged hitting be filed as harassment. Mejdina, 27, now has the option to file for an order of protection or to sue the 39-year-old catwalk goddess for damages. Mejdina was treated by the Emergency Medical Service at the 17th Precinct stationhouse for bruising and swelling under an eye, Daily News reported. ____________________________________________________________ Naomi Campbell Allegedly Attacks Driver Police are looking to question Naomi Campbell for allegedly attacking her driver in NYC, while seated in the back seat of the car, TMZ reported. Campbell’s spokesman Jeff Raymond told TMZ, “There shouldn’t be a rush to judgment. Naomi will co-operate voluntarily, and there is more to the story than meets the eye.” NYPD Deputy Commission of Public Information, Paul Brown, said that the driver pulled his car over in Midtown Manhattan at about 3 p.m. and reported that Campbell assaulted him. The supermodel allegedly fled the scene on foot. In 2007, Campbell pleaded guilty to misdemeanor assault charges for hitting her housekeeper with a cell phone. In 2000, she pleaded guilty to assault charges for attacking an assistant. She was also arrested in October 2006 for allegedly assaulting her drug counselor. In February, Campbell spoke about dealing with her anger-management issues on CNN’s Connect The World, saying, “Everybody has their demons and I had to look in the mirror and face mine. “Until I did that there was not going to be a change in my life. …Every day I’m learning something new. But I know I’m taking steps forward and not backwards.” Read More: