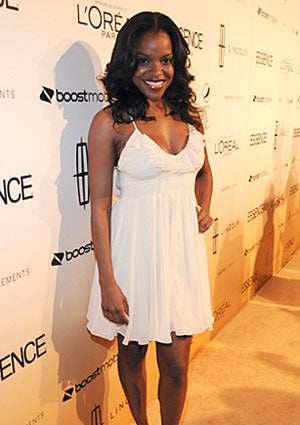 Some actors might take any role offered to them without much contemplation, while actress Nadine Ellis has one specific requirement: the role must have a “redeeming quality.” That’s one reason the former Pussycat Doll took the role of Dr. Stacey Lawrence on BET’s “Let’s Stay Together,” which recently wrapped up its first season to great ratings.

ESSENCE.com spoke to Ellis about her role on “Let’s Stay Together,” Black comedies on the small screen and her thoughts on First Lady Michelle Obama.

ESSENCE.com: Your character Dr. Stacy Lawrence is a driven pediatrician. Is it important for you to accept roles that portray African-American women as progressive?
NADINE ELLIS: Yes, I told my agent I didn’t want to primarily play the crackhead mom who loses her kids, or the prostitute. I was so excited about the Stacy character because you have young kids watching and you want them to see a Black female doctor so they know it’s not foreign.

ESSENCE.com: Explain the relationship dynamic between your character Stacey and her fiance Charles (played by actor Burt Belasco)?
ELLIS: Stacey represents a lot of women that I know. She’s a little older than her fiancé. Prior to finding him, she was building her career and never really found that guy at the time society thinks you should have. She’s struggling with holding on to her independence but also wanting to love this man. In the first season, you see their growing pains.

ESSENCE.com: Outside of your character on, is Nadine Ellis difficult to get along with in relationships?
ELLIS: No I don’t think so. I’m so adorable. I don’t know what you’re talking about. [Laughs] I’m a real life girl, so you get all of the great stuff that comes along with that. I’m comprised of many colors. I’m definitely someone that speaks my mind. I’m not a pleaser while getting nothing in return. I’m a give-and-take kind of person and that’s what I require of my relationships.

ESSENCE.com: We’re witnessing quite a few African-American original series emerging. Where were they a few years ago?
ELLIS: That’s a great question. I have no idea, especially with President Barack Obama being in the White House, there was a feeling we would be represented in other industries. Not sure why we disappeared, but I’m really glad we’re back.

ESSENCE.com: Give some names of women who rock beyond measure.
ELLIS: My mother who taught by example. I respect Diane Ross professionally. I remember seeing her in “Mahogany” and “Lady Sings the Blues” and being in awe. Remember she didn’t start off as an actor. Michelle Obama is someone that I would love to have lunch with. Michelle Obama just seems like a rock star. I love when there are accomplishments yet genuineness is attached. Michelle Obama is an amazing wife and mother.