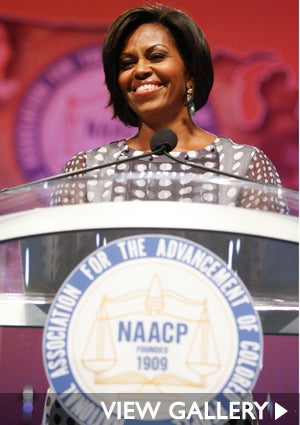 The NAACP kicked off its 101st annual convention this weekend in Kansas City. The nation’s oldest and largest civil rights organization will touch on a variety of topics such as the impact of racial disparities in the criminal justice system, proposed courses of action for the BP oil spill in the Gulf of Mexico and more. An array of leaders from various fields will be participating in the continuing event, from White House cabinet officials to actress Raven-Symone, singer Toni Braxton and others. First lady Michelle Obama spoke on Monday. She discussed steps to combat childhood obesity and her efforts to create a healthier generation of kids through the “Let’s Move!” campaign. Here’s a gallery of speakers from the conference and what they had to say. The convention ends on July 15.
Loading the player...