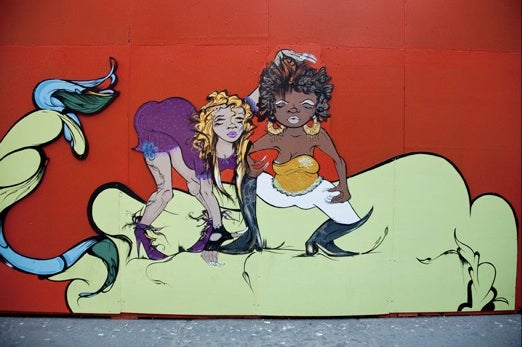 African American and Hispanic leaders gathered near New York’s Times Square on March 17 to protest a 92-foot mural on 42nd Street, CNN reported. The mural, commissioned to Puerto Rican artist Sofia Maldonado by the Times Square Alliance depicts Black and Hispanic women in suggestive poses wearing provocative attire, brightly colored hair, tattoos and piercings. Protesters claim that the painting depicts minority women in a negative light, feeding on mainstream stereotypes. An open letter from protesters to the Times Square Alliance reads, “This art is an affront to all the hardworking Black and Latino women who struggle to maintain their dignity in a world that feels there is no repercussions for disrespecting them.” But Maldonado says her intention was to “celebrate” these women. In an interview with the Daily Voice, the artist said she wanted to draw light to, “the women people don’t pay attention to,” and called her mural, “a celebration and recognition of a specific stereotype that has been portrayed as negative. I am not generalizing Latina or Black women, just deconstructing people’s minds.” But do you think Maldonado achieved what she aimed to do? Is this a celebration of non-conventional beauty or a reinforcement of negative stereotypes? Read More: